Civitans to start chapter in Calera

CALERA – Calera residents will have an opportunity to give back to their community through a new Civitan International chapter beginning in Calera.

“Civitan is a service club like Kiwanis, Lions and Rotary, each one had something different they do, but each one is service in its community. The unique thing about Civitan is it was started in Birmingham,” said Dee Hutsler, a member of the Greater Titusville Civitan Club. 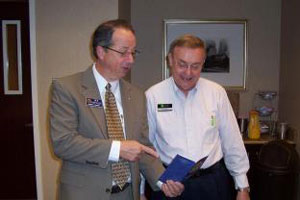 Dee Hutsler, past governor, Alabama Central District and Greater Titusville Civitan Club member, speaks with Keith Johnson, a Waterford resident, about the benefits of a Civitan Club in the Calera community. (Contributed)

Hutsler is assisting Calera residents in building the new club’s membership and obtaining a charter.

“There are about 20 clubs in the Birmingham-metro area. We’re a fairly heavily populated Civitan club area,” Hutsler said. “We were looking for areas in the Birmingham metro area, and Calera jumped off the map. We found it to be a very community-minded area, so it’s a real perfect fit.”

The club held its first meeting March 22 at the Hampton Inn in Calera. To become a chartered club, the chapter needs at least 20 members.

“With Calera being a new and growing area, I feel it’ll benefit Calera residents to get involved in something to put back into the community,” said Calera resident Larry Fikes. “Most of the funds, which this is a nonprofit, go into the Civitan International Research Center at UAB.”

The club will meet every Thursday morning at 7 a.m. at the Hampton, located on Metro Drive in Calera. A continental breakfast is free for first-time visitors, and the meeting will conclude by 8:30 a.m. Once the club is chartered, it’ll meet every two weeks instead of every week.

“We’ve just had a great reception from the community,” Hutsler said. “We’ve built clubs and not built clubs all over central Alabama, and not every community is as civic minded as this one.”

For more information about Civitan International, visit Civitan.org. To learn more about the new Calera Civitan chapter, contact Fikes at 410-4602.