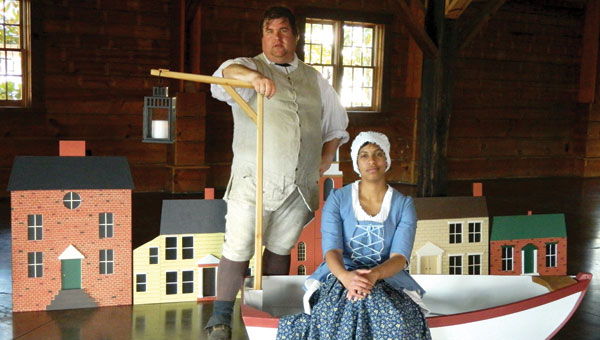 American Village interpreters Chris Long (portraying William Dawes, one of several who alerted colonial minutemen of the approach of British army troops prior to the Battle of Lexington and Concord) and Lesli Johnson (portraying Matron Sarah Ray, a physician’s assistant in the Continental Army), are seen with some of the new set pieces created for the American Village by members of the Alabama Woodworkers Guild. (Contributed)

MONTEVALLO – The Alabama Woodworkers Guild is a community service organization from Maylene that promotes the art and craft of woodworking. The American Village contacted Guild President Monta King last fall to inquire about having the guild do a community service project for the Village.

Guild project leader Bob Moore, and about a dozen other Guild members have since constructed a set for the American Village’s Living America’s Story: Patriots program. This program is conducted each spring for kindergarten through third grade students. In the program, children actively participate in helping Paul Revere symbolically cross the Charles River and ride to warn the colonists at Concord that the Redcoats are coming.

Guild members constructed 22 elaborate wooden building facades, each with considerable detail including shutters, steps and pediments over windows and doors. The facades represent Paul Revere’s home, the powder magazine and the Old North Church, from which lanterns famously flashed one if by land and two if by sea. A crafted rowboat used by Paul Revere to cross the river was also created.

University of Montevallo senior guard D.J. Rivera waits for a teammate to set a pick in the Falcons' 79-72 win... read more