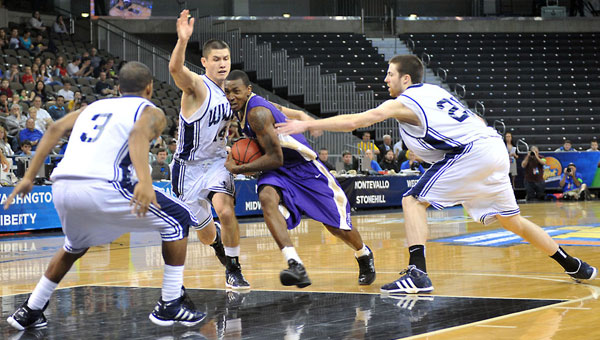 University of Montevallo senior guard D.J. Rivera drives to the basket in the Falcons' 72-65 loss to Western Washington University in the NCAA Division II national championship game March 24 at The Bank of Kentucky Center in Highland Heights, Ky. (Contributed/Matthew Orton)

The 6-foot-4 Philadelphia, Pa. native would gladly trade in the final awards he received for a much more important achievement.

Rivera, two days after being named an All-American, was named the Most Outstanding Player in the NCAA Division II national championship game March 24 at The Bank of Kentucky Center, but the recognition felt meaningless with the prize Rivera and his teammates left on the floor after struggling to put the ball in the basket in a 72-65 loss to Western Washington University.

“To be honest,” Rivera said. “I would have traded it for a national championship.”

The Falcons had several chances to capture their first national championship in school history, but Montevallo shot just 37 percent from the floor and had trouble converting easy looks around the basket against the taller Vikings.

Western Washington stretched its lead to 12 points late in the game, but Montevallo cut the deficit to 68-64 and had one final opportunity to get it to one possession before making only 3-of-6 free throws down the stretch and missing two 3-point attempts in the final minute.

In the end, Montevallo coach Danny Young said the Falcons couldn’t overcome the Vikings’ hot-shooting in the second half.

“They just made a bunch of shots,” Young said. “We missed a couple of defensive assignments and they made some tough shots, especially down the stretch.”

Young said the Vikings’ size hampered the Falcons’ offensive plans in a way no team had done previously this season.

“It hadn’t happened to us all year long,” Young said. “I think it goes back to us reversing the basketball. We did that when we made a run. When we went away from it, they clogged it up at the top.”

FROM STAFF REPORTS University of Montevallo senior Heath Peterson was named the National Player of the Week in NCAA Division... read more