Alabaster swears in school board 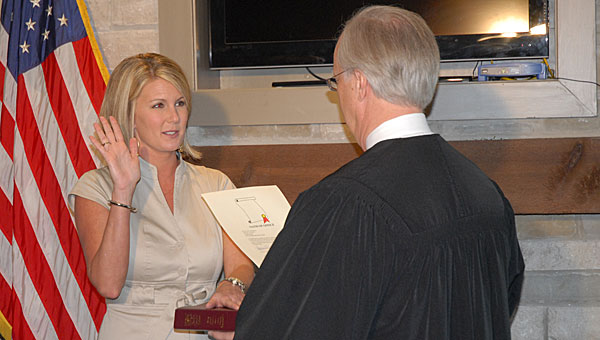 Alabaster Board of Education member Melanie Shores is sworn in by Shelby County Probate Judge Jim Fuhrmeister during a March 26 ceremony at the Alabaster Senior Center. (Reporter Photo/Neal Wagner)

The Alabaster Board of Education soon will begin holding regular meetings, after four of the five board members were sworn into their positions during a March 26 ceremony.

During the ceremony, which was held at the Alabaster Senior Center, Shelby County Probate Judge Jim Fuhrmeister swore in board members Adam Moseley, John Myrick, Melanie Shores and Ty Quarles.

The fifth Alabaster School Board member, Linda Church, was out of town on business during the ceremony, and will be sworn in during the Alabaster City Council’s April 2 meeting, said Ward 1 Councilwoman Sophie Martin.

Moseley, who resigned his Ward 3 City Council seat to take a position on the school board, said the school board has yet to finalize its meeting schedule, but likely will hold its first meeting within the next few weeks.

Church is a former teacher with the Shelby County Board of Education, and Myrick is a retired teacher, principal, superintendent and school board member with the Saraland School System.

Quarles is the executive director of facilities administration at UAB, and said during his interview he has been involved with education and children’s programs for many years.

Shores is a professor at UAB and is involved in the PTO at her daughter’s school, Creek View Elementary.

During the swearing-in ceremony, Fuhrmeister praised the about 50 people in attendance, and said it was “an honor and a privilege” to administer the oath of office to the board members.

“The very fact that you are here means that you are a public servant. To me, that’s the greatest thing a person can be,” Fuhrmeister said to the crowd. “Politicians, school board members, school principals, everyone are public servants, and I pat you on the back.”

Ward 6 Councilman Scott Brakefield, who served as chairman of the council’s education committee, said school board is the “next step in the city’s evolution.”

Alabaster Mayor David Frings said the City Council did a “great job” of selecting the five school board members, and called the swearing-in a “monumental evening.”

“There is no doubt that we are going to see the best school system in the state of Alabama,” Frings said.

Boy airlifted after being hit by truck

FROM STAFF REPORTS A 9-year-old boy was airlifted to Children’s Hospital with severe injuries shortly after 4 p.m. on March... read more