Fighting on the home front 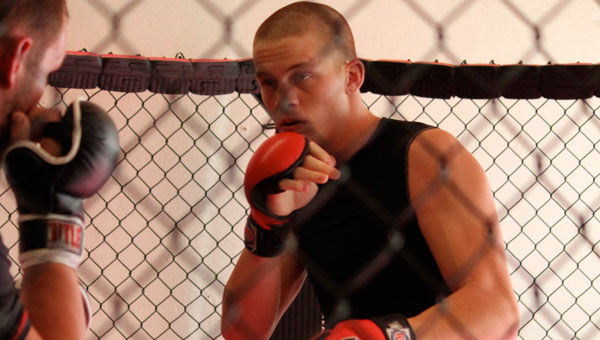 Shelby native Keaton Wood participated in the first sanctioned mixed martial arts competition in the state of Alabama, the SportFight X Alabama vs. Georgia event, on March 24 at the Von Braun Center in Huntsville. (File Photo)

Keaton Wood wondered if he would ever step into the ring for a mixed martial arts bout in the state of Alabama.

The day finally came for Wood last weekend, when the Shelby native took on Wes Baugh in the debut of MMA fighting in Alabama at the Von Braun Center in Huntsville on March 24.

Wood earned a technical knockout in 34 seconds by using a guillotine choke against Wes Baugh in the 145-pound bout in the Alabama vs. Georgia event sponsored by SportFight X, which bills itself as “Southeastern MMA’s Ultimate Proving Ground.”

Many of Woods’ supporters traveled to Huntsville to see him fight within the state’s borders for the first time, which was made possible when the Alabama Athletic Commission finally began issuing licenses for MMA events in January.

“It was pretty cool,” Wood said. “I had a lot of family and friends there.”

Wood said a rigorous training regiment in preparation for the day he could fight in Alabama paid off in his first bout.

“I train pretty much seven days a week,” Wood said. “I’m running five or six hours a day and working out and dieting.”

Wood said MMA event promoters have expressed interest in his participation in future events. Wood said he expects his next bout to take place in Mobile.

“They definitely wanted me on the next card,” Wood said.

Adam Gibbs, SportFight X organizer, said Wood’s inclusion on the card for the first MMA event in the state should be a source of pride.

“I’ve got a lot of guys on this card that I feel like are the best in Alabama,” Gibbs said about the Alabama vs. Georgia event.

Wood’s ambitions are to one day compete in the Ultimate Fighting Championship bouts, the highest profile MMA competition in the world.

For now, Wood is taking it one bout at a time.

“Really, I just want to see how far I can push myself,” Wood said.

Wood’s first bout in Alabama can be seen online at Youtube.com/watch?v=EWuruPi3_o4&feature=related.