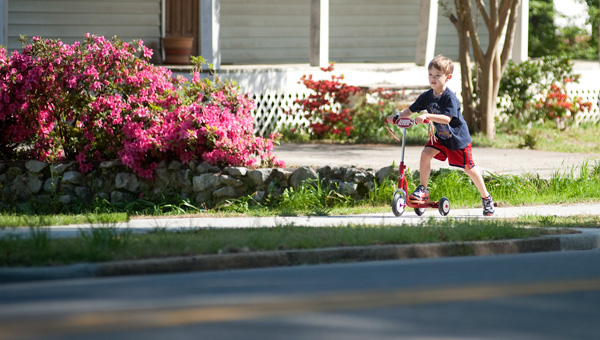 Will Deaver, son of Angela Deaver, a Columbiana resident who is concerned about excessive speeding down Main Street, rides his scooter on the sidewalks beside the road after school on March 28. (Reporter Photo/Jon Goering)

COLUMBIANA — Columbiana resident Angela Deaver has been living near Main Street for 11-and-a-half years and has spent a lot of that time worrying about excessive speeders.

Deaver has a son who starts kindergarten in a year, and she said she would refuse to allow him to stand at the bus stop with the other children at the intersection of Main Street and Sterrett Street because drivers often disregard the posted 25-mile-per-hour speed limit.

“Once you have children, everything changes,” Deaver said. “The city has to realize this is a residential area, and there is not a speed limit sign from downtown to north on Main Street.”

Deaver said the city has provided the residents with new sidewalks, and her young son enjoys riding his bicycle and playing on them.

“We have these new, beautiful sidewalks, and my son plays on them just a few feet from these speeding cars,” she said.

Deaver said she isn’t looking to place blame on the city, but would like to shed some light on the issue and have additional precautions taken to reduce the amount of speeding in the area.

“The city has been great. I’ll call Mayor Allan Lowe, and he will send police officers out for extra patrols and post officers in the area,” Deaver said. “But I understand they can’t be there all the time.”

Deaver said some construction or logging trucks still use Main Street instead of the bypass around the city, and often times speed through the area.

“I want to be one of those areas where police are always present to deter speeding,” she said.

Deaver would like children-at-play signs, additional speed limit signs, scores in the pavement or speed bumps installed to ward off excessive speeders.

Lowe said the Alabama Department of Transportation discourages the use of children-at-play signs because it has been said they encourage children to use the street as a playground.

Lowe said he would increase the police presence in the area to help alleviate the speeding concerns.

“We’ll continue to put officers out there at various times so people won’t know when to expect them, and we will continue to prosecute speeders,” Lowe said. “The problem is not limited to just Main Street. I get a lot of calls from people on other city streets as well.”

“We catch more than people would think, but obviously we haven’t caught enough to deter people from speeding,” he said. “I thank Mrs. Deaver for her concern for her neighbors and our city, and we will continue and increase our efforts to catch these speeders.”