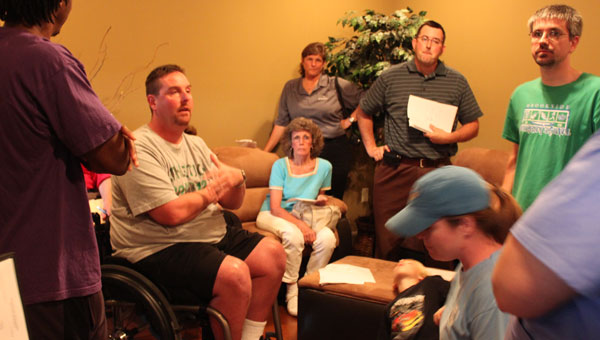 WESTOVER – Road conditions in the Willow Oaks subdivision in Westover caused a heated discussion during a meeting March 27.

Jack Donovan of Donovan Builders, who built the majority of the homes in the 154-lot subdivision and currently owns five to six rental homes, became Willow Oaks’ HOA president when the subdivision’s developer, Connor Farmer, declared bankruptcy, according to Donovan.

Donovan has on the board since before 2008 when resident Betty Sanders purchased her home.

When the developer declared bankruptcy, however, the question arose of who assumed the liability to maintain the subdivision roads. As the roads deteriorated, residents contacted Mayor Mark McLaughlin to see if the city could pay for road repairs.

“The city has a bond for streets and one for sidewalks,” McLaughlin said. “I want to know if someone acquired the assets out of the bankruptcy or out of foreclosure. It makes a big difference. We’ve put a moratorium on building permits, but I haven’t reached a conclusion to who owns the streets.” 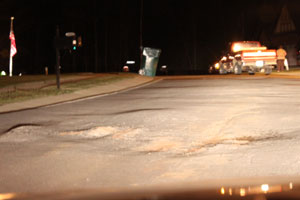 Pictured is an example of a pothole in the WIllow Creek subdivision off Shelby County 55 in Westover. (Reporter photo/Christine Boatwright)

The moratorium prevents builders from constructing new homes in the subdivision, but builders with permits prior to the moratorium may continue construction, according to McLaughlin.

While Donovan cannot continue construction, he has continued to move dirt in a few of the lots with construction vehicles, according to Willow Creek residents during the meeting. The pre-construction preparation is a result of developer Chris Williams and ServisFirst Bank requesting Donovan be the builder on the properties, according to Donovan.

The homeowners’ contracts stated the developer is responsible to put a top coat on the roads, then the roads are turned over to the city for maintenance.

Resident Steve Riggins said the road issues will continue until construction is complete, as construction vehicles are damaging the roads. Also, he said the city’s bond money will only cover about half of the needed seal coat for the roads.

“Until the subdivision is 90-percent complete, the roads need to be addressed by you and the builders,” said Steve Riggins to Donovan. “We need you to go forward and get this fixed.”

Donovan said that as a builder and owner of rental properties, he wants the roads fixed, as well.

City Councilman Larry Riggins said whoever obtained the assets from the developer owns the property the roads sit on.

“People in this subdivision do not deserve to deal with the streets like they are,” he said. “These issues need to be addressed.”

FROM STAFF REPORTS WESTOVER – The city of Westover will get a visit from Santa Claus himself on the evening... read more