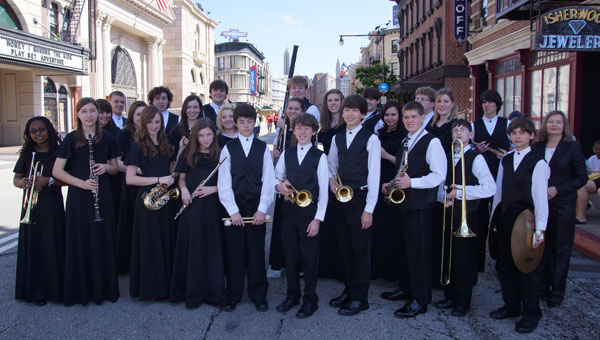 Members of the Kingwood Christian School concert band recently earned top honors in their class during a competition at Disney World. (Contributed)

When Kingwood Christian School band director Tyra Cutcher heard the announcement, she began cheering just as hard as the 25 members of her concert band.

Although the KCS concert band was up against bands much larger than theirs, the Lions took home the top award in their division.

“Everyone was on their feet. We knew it was a blessing from God. God is good, and he has blessed our students,” Cutcher said. “All the students were just so elated, and I am so proud of them.”

During a March 15-18 band trip to Orlando, Fla., the KCS band performed in Class A at the Festival Disney competition, which was held at Disney’s Hollywood Studios Premiere Theatre.

Class A allowed bands from schools with an enrollment of 600 or less. Although it was the festival’s smallest class, Kingwood has an enrollment of 132 in grades nine-12. Four other bands from larger schools across the country also competed in Class A.

“We were hesitant at first, but we thought it would be a good experience. We thought the students would grow from it and become better musicians, which is our goal,” Cutcher said.

After performing, the KCS band earned a trophy for achieving an “excellent” rating. The Lions were then awarded another trophy for earning the best score in their class.

“It was a very exciting experience. We knew there were a lot of good schools there,” Cutcher said.

“That was an awesome experience to be able to give Christmas to them,” Cutcher said. “I’m glad we could help to brighten their day.”

The band will perform its award-winning concert at 8 a.m. at KCS on Thursday, April 5.