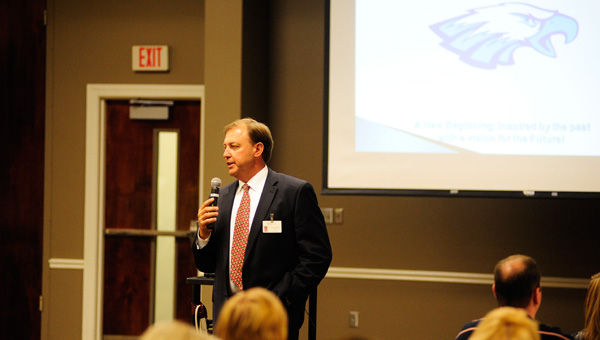 Student involvement, a focus on school programs and involvement and individualized student help recently helped Calera High School earn one of the top awards in the state, school officials said during a March 28 Greater Shelby Chamber of Commerce luncheon.

During the luncheon, which was held at the Pelham Civic Complex, CHS Principal Richard Bishop said his school recently was named one of 10 Banner Schools in the state by the Council for Leaders in Alabama Schools. Bishop said 142 schools applied for the award.

The award came a few years after CHS set the highest-ever graduation rate in Shelby County at 98 percent, Bishop said.

CHS this year added Advanced Placement English language and chemistry classes, and is planning to add AP physics and psychology next year, said school counselor Melissa Hadder. With next year’s additions, the school will offer 11 AP classes, she said.

Bishop said every Calera student in grades seven-12 must complete five hours of community service, and said CHS names two students of the month and two Most Improved Eagle awards per grade each month.

Through the school’s “My Future” and “A+ College Readiness” programs, both of which are funded by grants, school officials help students prepare their resumés and “prepare for life after high school,” Hadder said.

“Our goal is that 100 percent of our grads will have something to go to after graduation,” she said.

This year, the group will travel to Honduras to teach local children how to construct the vehicles, which will help Hondurans transport goods and reach medical facilities, Copes said.

“All the parts (for the prosthetic leg) are available in Honduras and Haiti,” Copes said.

FROM STAFF REPORTS A federal grand jury today indicted a Mississippi man on one robbery charge after authorities alleged he... read more