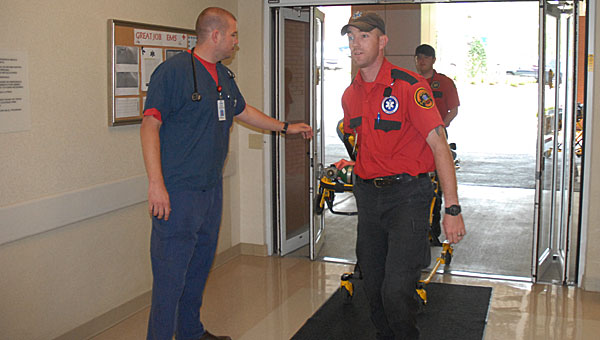 The Shelby Baptist Meidcal Center and Regional Paramedical Services recently teamed up to cut down on the time it takes to get a heart attack patient from the ambulance to the catheterization lab for treatment. (Reporter Photo/Neal Wagner)

Alabaster’s Shelby Baptist Medical Center and Regional Paramedical Services over the past several months have been able to drastically cut down on the time it takes for active heart attack patients to receive the life-saving treatment they need.

Through a program launched by the two companies in November 2011, paramedics take a photo of a heart attack patient’s electrocardiogram readout and transmit it to Shelby Baptist’s emergency room.

“The EKG has already been submitted, so the cardiologist already knows what’s going on while the patient is in transit to the hospital,” said Shelby Baptist Director of Business Development April Weaver. “We’ve changed the process to expedite patient care.”

Registered nurse Kim Hayes, Shelby Baptist’s emergency room nurse manager, said receiving the patient’s EKG readouts before the patient arrives at the hospital saves valuable time for those who are actively having a heart attack when they arrive at the hospital.

“We’ve already got the EKG when they get here, so that allows them to bypass the emergency room and go straight to the cath(eterization) lab,” Hayes said.

Before paramedics were able to transmit EKG readouts to the hospital, heart attack patients arriving by ambulance typically had to make a diagnostic stop in the emergency room before they were transported to the catheterization lab, Hayes said.

In the catheterization lab, doctors insert small balloons into a patient’s blood vessel to help bloodflow and stabilize the patient.

The Birmingham Regional Emergency Medical Services System recently used the Shelby Baptist program as a model for other emergency medical services and hospitals throughout the Birmingham area, Weaver said.

“We had the pilot program and it did very well,” Weaver said. “We saw a need, we started a project to address the need and now it’s being used across the Birmingham area.”