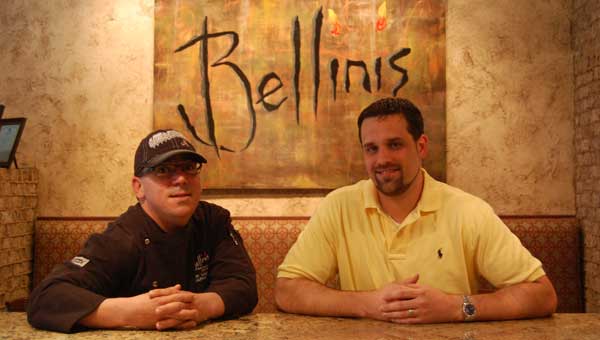 HOOVER – Matthew Lagace has returned to Bellinis Ristorante as the executive chef and general manager.

Lagace, who helped open Bellinis four years ago and returned 10 weeks ago, said he was excited about the opportunity to work at the Italian restaurant again.

“I couldn’t resist coming back to this place,” he said.

Majority owner Doug Hovanec said Lagace, in addition to being a good chef, is a friendly presence for customers and employees.

“We have always gotten along, and we have a good working relationship,” Hovanec said. “He’s one of the people I feel like I could trust.”

Hovanec and Lagace first partnered to open Bellinis in April 2008. Lagace left a year later to open Rogue Tavern in Birmingham, where he stayed for three years.

Lagace had extensive restaurant experience prior to opening Bellinis. He graduated from Culinard with honors in 2001, and worked at Nonna Rose and Prairie Fire Grille in Birmingham.

Lagace has made few changes to Bellinis since returning, save for a few tweaks to the lunch menu. The Italian restaurant focuses on serving local and seasonal food.

Hovanec said they hope to offer live jazz music later in the spring and summer. Lagace keeps customers up-to-date with changes, as well as specials and drinks by posting to Facebook daily.

The restaurant is also committed to several upcoming events, including Greystone’s Fallen Heroes and A Taste of Shelby County. For Hovanec, who splits his week between the restaurant in Hoover and a consulting company in New York City, community involvement is an important component of being located in Shelby County.

“There are a lot of good events in the county,” he said.