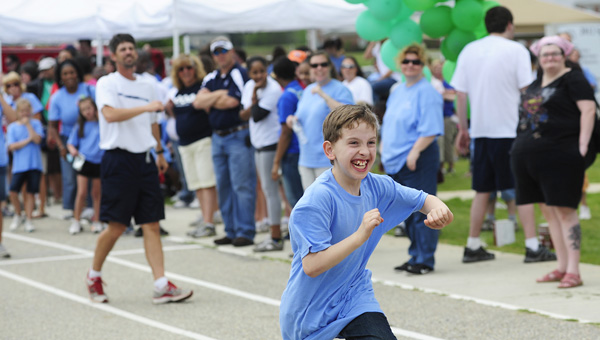 Nate Marler, an 8-year-old from Meadow View Elementary, competes in the 50-meter dash during the Shelby County Special Olympics in Calera on March 30. (Reporter Photo/Jon Goering)

CALERA – A host of Special Olympians paraded into the Calera High School football stadium before competing in the games March 30.

“It’s an awesome experience for our kids. They’re excited, and they’ve been talking about it for months,” CHS Principal Richard Bishop said.

Each school created a banner supporting this year’s Special Olympic’s slogan of “changes in attitude.”

“The emphasis is on having the best attitude and that they can do it,” said Shelby County Schools adaptive physical education teacher Valinda Pate, who coordinated the event. 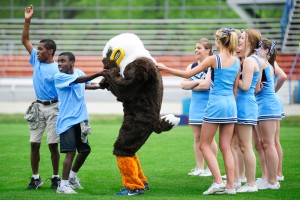 The Special Olympics, which are for special-needs students between ages 8 and 21, were held in Calera for the first time this year.

“We’re so excited. It’s a blessing to be hosting the event,” Mayor Jon Graham said. “We look forward to having it in Calera for years to come. We gladly support it with our staff and with hands-on support.

“This is right up our alley,” he added. 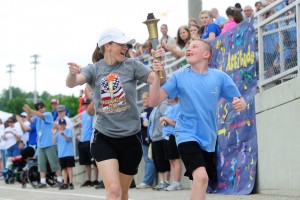 Noah Bunn, an 11-year-old Calera Middle School student, ran the torch into the stadium with Pelham Police Officer Debbie Sumrall to the cheers of the other competitors.

“I didn’t even have to wake him up this morning,” said Chris Bunn, Noah Bunn’s father. “He knew he’s have all these people cheering for him.”

“We do a lot here in Calera for special-education kids, and this is great addition to Field of Angels (special-needs baseball league).”