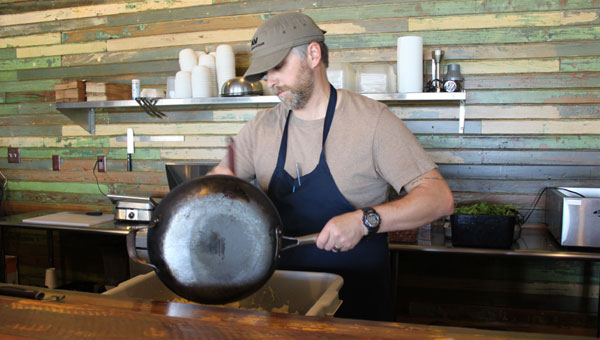 CHELSEA – While living in Chelsea for the past seven years, Sean Butler has kept an eye on a certain building of U.S. 280. Now, Butler, the owner of Food Studio B, is bringing fresh food and community to the Chelsea community.

“I’ve always had a craving to get back in the community side,” Butler said. “I need more space and wanted to grow to what we wanted to do.”

Food Studio B was located in Greystone for four years, but now resides near Chelsea’s BP gas station and Chelsea Lane at 16688 U.S. 280 East.

“We want to grow organically and meet people,” he said.

Butler decided to make the move to have more time with his children.

The restaurant offers catering and a daily menu composed of made-from-scratch, fresh ingredients.

“We have communal-based tables because we want to be a gathering place,” he said.

Next to the restaurant’s front door is a bucket of sidewalk chalk for children to use to draw on the concrete floor.

The restaurant is set up to eventually become a not-for-profit organization, giving back to the community and supporting education regarding childhood obesity and culinary education.

“It’s a scratch-based facility,” Butler said, who has been in the food industry for 25 years. “What we don’t know (to cook), we learn.”

The restaurant’s breads are made every other day, and Butler plans on experimenting with canning, pickling, relishes, preserves and other “fun stuff.” He also plans to have an outdoor kitchen with a wood-fire stove for pizzas and the “best burgers in the world.”

“We don’t run out and say we’re organic,” he said. “Every step is feasible to develop a good, healthy product. We want you to be around to eat with us for 90 years, not 20 years.”