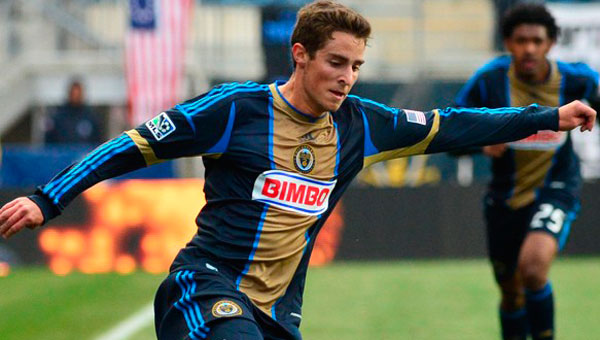 Chandler Hoffman would have been satisfied with seeing mop-up duty in his first professional soccer match with Major League Soccer’s Philadelphia Union.

Hoffman, a former Oak Mountain High School standout who was drafted with the 13th overall pick by the Union in the 2012 MLS Draft following a spectacular career at UCLA, didn’t expect to be on the field for the opening whistle.

Hoffman, a MAC Hermann Trophy semifinalist following his junior year at UCLA and a former Gatorade Player of the Year in Alabama during his career at Oak Mountain, helped the Union earn their first point in MLS standings March 31 with a scoreless draw against the Vancouver Whitecaps at PPL Park.

“To see your name in the lineup, have your name announced and walking out of the tunnel with the fans going crazy was something special,” Hoffman told the team’s website, Philadelphiaunion.com. “It was a great feeling. I was so pumped up at the beginning of the game.”

Hoffman played the first 51 minutes in the match.

“I was so amped at the start and I felt better once I got those first couple of touch passes out of the way,” said Hoffman, who finished his UCLA career with 29 goals, nine assists and 67 points in 54 games played. “I was kind of nervous before the game but I settled down during the game. I still felt the adrenaline and just tried to push through and do everything I could to help the club get the win.”

Hoffman said he is prepared to play any role on the team in his first professional season, but being in the starting lineup was a nice feeling.

“I’m going to enjoy this one and keep working like I have since I got here,” Hoffman said. “I’m here to help the team and I will work as hard as anyone. I’m excited to be a member of the Philadelphia Union and I’m honored to play in front of these great fans.

“Hopefully, my name will be called again. I will keep working to be ready for whatever the club asks of me.”