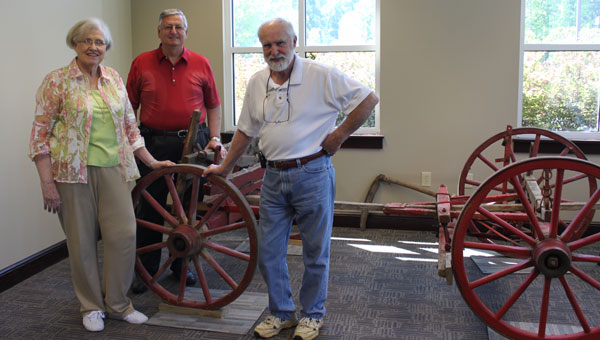 From left, Juanita Champion, Mayor Earl Niven and Bob Wanninger show off a wagon from a farm in Chelsea. (Reporter photo/Christine Boatwright)

CHELSEA – Chelsea’s history will be on display in City Hall starting April 15.

The City of Chelsea Historical Museum features artifacts and records from Chelsea’s agricultural history and incorporation.

“The incorporation of Chelsea is really what got us started,” said City Councilmember and museum co-founder Juanita Champion.

The museum will also have a computer for visitors to interact with books too fragile to handle. Champion said she intends to develop an elementary and middle school educational program to teach kids about Chelsea’s history.

“When we formed the city, we said we wanted to protect the traditions of Chelsea, and this is a good way to have those memories,” Mayor Earl Niven said.

Bob Wanninger, the museum’s co-founder, plans to display surrey wheels he has.

“A surrey is what you’d take on a Sunday afternoon ride with your sweetheart,” Niven said.

The reception on April 15 will be from 2-4 p.m., and Champion said she hopes to have a weaving demonstration.

“We’re going to outgrow this place before we turn around,” Niven said of the room in City Hall. “We’ll possibly be ready to build a new library in about four years, and we’ll move this into the old library building.”

The museum will be open on Sundays from 2-4 p.m. or calling City Hall for an appointment.

“If we don’t preserve our history, we don’t know where we’re going,” Wanninger said.

For more information about the Chelsea Historical Museum, call City Hall at 678-8455.

Alabaster officials recently agreed on a plan to construct a new City Hall building next to the current Alabaster Senior... read more