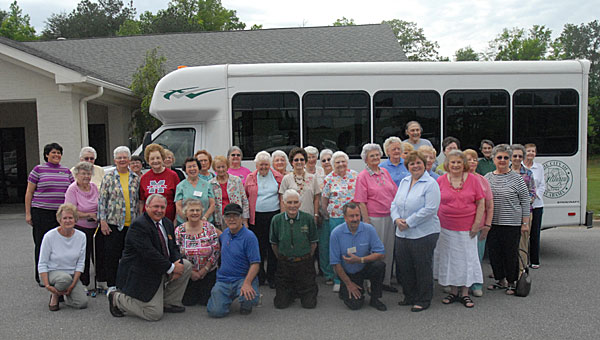 Members of Pelham’s Senior Center cheered and applauded as Mayor Don Murphy, escorted by a Pelham police cruiser, turned the corner in a new 25-passenger bus on April 5.

“This is over three years in the making. It’s a dream come true,” said Pelham Library Director Barbara Roberts.

Murphy delivered the new bus to the Senior Center three days after the Pelham City Council voted to approve the $53,500 purchase. The bus will replace a 15-passenger van Roberts said was unreliable and difficult for the seniors to enter and exit.

“Not a penny of this purchase came from taxpayer money,” said Pelham Mayor Don Murphy, noting Roberts was instrumental in securing a $35,000 Shelby County Health Foundation grant to use for the purchase.

The rest of the project was funded by bake sales and garage sales held by the seniors, a $1,000 Walmart grant and financial support from Shelby County Commissioner Dan Acker Sr., state Rep. Mary Sue McClurkin and state Sen. Cam Ward.

The bus’s maiden voyage with the Senior Center will be an April 26 trip to the McWayne Science Center in downtown Birmingham.

Pelham Senior Center member Roy Jowers said the new bus is a culmination of years of work by the city’s seniors. After Murphy delivered the bus, the seniors celebrated by eating two bus-themed cakes.

“Every one of us earned this bus,” Jowers said a few minutes before Murphy handed him the keys to the bus. “We put in a lot of long nights, but it’s finally paid off.”

Murphy praised Roberts, the seniors and everyone who supported the center’s efforts.

“I want to say how much I appreciate the opportunity to work on the opportunity to make y’all happy,” Murphy told a group of seniors who stepped into the parking lot to look over their new mode of transport. “This is your bus. The city of Pelham owns it, but it’s y’all’s bus.

“I glad we got y’all out of that van. It’s about time,” Murphy said.

BY CHRISTINE BOATWRIGHT / Staff Writer COLUMBIANA – The Columbiana Beautification Board has announced its April home and business winners.... read more