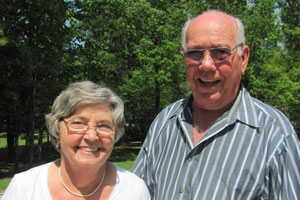 Joyce and Bobby Lee met at a party in 1961, and have been married for more than 50 years. (Contributed)

The Lee family moved around several times, but by the time “Bobby” (Robert Lee) was 11 or 12 years old, his dad had purchased six acres on the corner of Highway 119 south and County Road 12. They grew corn, peas, beans, onions, tomatoes, squash, okra, strawberries and just about anything you could think of.

Bob and brother, Lynn, always tried to get each other in trouble, but strict Mrs. Lucille could usually fix the problem. Barn falls, broken arms, bats, rats, hunting, fishing, running away from home (always within seeing distance) and finally “hanging out at the café on Main Street in Alabaster” was the usual for the Lee boys.

By January 1951, Lee had all the credits he needed to graduate, so off to work he went. In May, his mother picked up his diploma for him. After several jobs he got the idea to join the Navy and see the world.

Lee had about the same job at each port, always a military funeral steward. After four long years, Lee was glad to return to Shelby County.

With the GI bill behind him, he could attend college. Lee enrolled at the University of Montevallo and made history. He attended one lecture, followed it with a lab and left, never to return. He tells his grandchildren he has the shortest college education in history.

Fast forward to 1961, where one summer night at a party he spotted a pretty young girl named Joyce Howard. She was 19, and when Lee said to her in four weeks, “Why don’t we just go get married” she said “OK.”

“The biggest blessing in my life is my beautiful wife Joyce, but don’t tell her I said that,” Lee said. “I’m still just a country boy.”

Jake Ellis has been working to supply Alabaster with medical supplies at Mash for more than eight years. (Contributed) By... read more