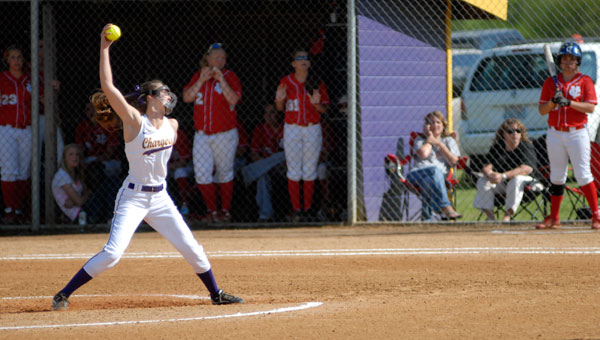 COLUMBIANA — Several impressive performances have been turned in by the home team on the Cornerstone Christian School softball field during the Chargers’ run of five consecutive Alabama Independent Schools Association Class 1A championships.

The Columbiana community hadn’t witnessed anything like the purple and gold faithful saw during the Chargers’ Alabama Independent Schools Association Class 1A, Area 1 contest April 6 against rival Coosa Valley Academy.

Cornerstone Christian hit a total of one homerun at the field in school history leading up to Friday afternoon’s contest. The Chargers ran that total up to four following an offensive explosion against the Rebels in a 10-5 win.

The victory allowed the Chargers to reclaim an area championship after seeing a streak of six straight broken last season.

Jana Kelbie Armstrong, Savannah Upton and Allie Toney each homered in the victory.

Upton led the Chargers offensively as she finished 2-for-3 with a homer and a triple. Upton drove in three runs in the victory.

Armstrong earned the win in the circle after striking out 14 batters in a complete-game victory.

Terrie Sprayberry led Coosa Valley offensively as she finished 3-for-3 at the plate. Sprayberry drove in two runs.

Hannah Vick, who finished with three strikeouts, took the loss.

Rivals to square off in one-game playoff

By WESLEY HALLMAN / Sports Editor COLUMBIANA — For the second year in a row, Coosa Valley Academy and Cornerstone... read more