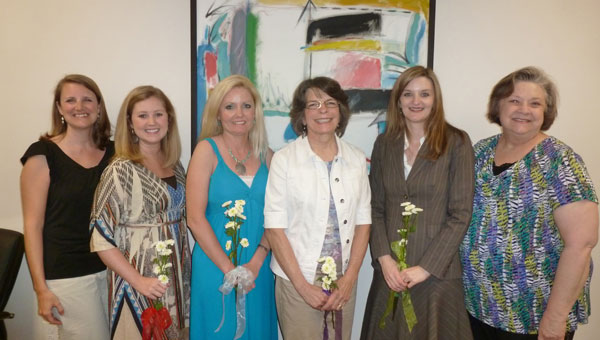 The installation was held at the Rush law office. Rush is a 1969 Shelby County High School graduate. She and husband Andy have one daughter, Hunter, age 10. After graduating from the Birmingham School of Law four years ago and having an office in Birmingham, Rush decided to open an office in her hometown in the building owned by her great uncle, Buck Falkner, located at 106 N. Main St., Columbiana. She practices general practice of law.

The Vignette Club was organized by the Culture Club of Columbiana in 1949. The first president was the late Mrs. Ginny Fowler, wife of the late Judge Conrad Murphree Fowler, mother of local attorney Conrad Fowler Jr., and mother-in-law to Vignette Rachel Fowler. Another charter member was the late Mrs. Wylodine Hill, wife of Elvin Hill, former superintendant of Shelby County Schools, and mother of State Rep. Mike Hill, mother-in-law of Vignette Carol Hill and grandmother of Vignette Jeffries.

Outgoing President Tresa House (Columbiana) has led the club extremely well for the last two years. As her last official duty, she thanked the club for the opportunity to serve and presented each new officer with a plant to signify their office.

The club today is comprised of 36 women whose mission is: “Building Friendships to Help Communities.”