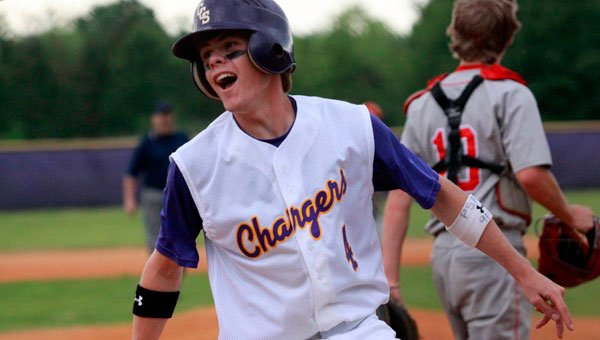 Smith’s Chargers played small ball and plated a run in the bottom of the eighth inning to claim a 1-0 victory, but Hughes made it clear he expects his Rebels will have another shot at Cornerstone Christian.

“I’ll see you in the (AISA Class 1A playoff) semis,” Hughes said as he waved goodbye.

“Always, right?” Smith responded, expecting the rivals to battle for a berth in the AISA Class 1A championship game for the third consecutive season.

Austin Davis became the hero in the bottom of the eighth inning when he lined a walk-off base hit down the left-field line, which plated Hagan Joiner for the game-winning run.

Joiner led off the inning with a walk and moved to second base on a sacrifice bunt by Tim Warren.

“The change in the bats has sent us back to old-school baseball,” Smith said. “We had to find a way to get a big hit. It’s a big win for us.”

Davis, who earned the win after pitching a scoreless inning in the top of the eighth inning, said he felt confident heading to the plate with the game-winning run in scoring position.

Adrian Young started on the mound and gave up just four hits with two strikeouts and two walks in 5 2/3 innings. Warren gave up one hit and recorded one strikeout in 2 1/3 innings in relief.

Cody Wood was tagged with the loss despite a spectacular outing on the mound. Wood gave up just one earned run on five hits with one strikeout and three walks in seven innings.

After Wood walked Joiner to lead off the inning, Tyler Hickman entered the game in relief and recorded one out before giving up the final hit.

“We just couldn’t find a way to get it done,” Hughes said. “They made the play and we didn’t.”