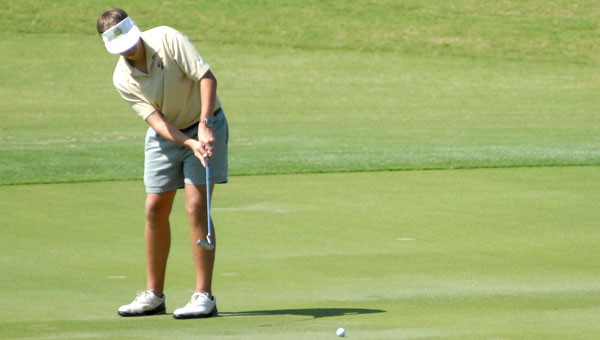 Nolen carded a 88 as a freshman back in 2009, the last time Pelham lifted the championship trophy.

“I think I played a little bit better this year,” said Nolen, who shot a 2-under par 70 and helped the Panthers claim the Shelby County tournament title April 10 at Ballantrae Golf Club. “I hadn’t been playing well this season. I finally put a good round together.”

Pelham carded a team total of 297 strokes, which edged second-place Briarwood Christian by one stroke.

Connor Slane and Joshua Shaw, who tied for fifth overall in individual standings, each fired a 2-over par 74 for the Panthers. John Menke, who shot a 7-over par 79, came in with a round under 80 for the first time in three years. Raymond Foushee rounded out the group of Pelham golfers with an 87.

The Panthers broke the 300 mark as a team for the first time under third-year coach Phillip Lawson.

“We played out of our minds today,” Lawson said.

The Lions’ Brent Gilbert carded a 76. Banks Nash finished with a 77, while Brenand Mallory shot a 79.

Dawson Moody led Oak Mountain with a 5-over par 77. Clay Nolen shot a 81, while Guice Potter finished with a score of 81. Tyler Edge and Phillip English each shot a 84.

Shope led Chelsea with his even par 72. Josh Parker shot a 84. Jesse Goss, the defending Shelby County tournament champion, carded a 86. Carter Bice finished with a 87, while Reed Kelley shot a score of 89 strokes.

Cole Ranson led Thompson with a 5-over par 77. Trevin Rider carded a 93. Austin Watts and Dustin Dewilde each shot a 95, while Nathan Forbes rounded out the group with a 101.

Nick Barton led Calera with his round of 91. Stephen Ellison shot a 92, while James Frost carded a 97. Josh Ellison and Dustin Campbell each fired a round of 101.

Dakota Sharpe led Montevallo with his round of 91. Frances Pope finished with a score of 93 strokes. Trenton Cummings carded a 110. Mitchell Sanders shot a 116. Gabriel Bridges withdrew from the tournament.

Christian Kendrick led Shelby County with his round of 97. Matt Gibson carded a score of 105 strokes. Andrew Brown shot a 111, while Blaine Wakefield finished with a 116. Wally Morris shot a 124.