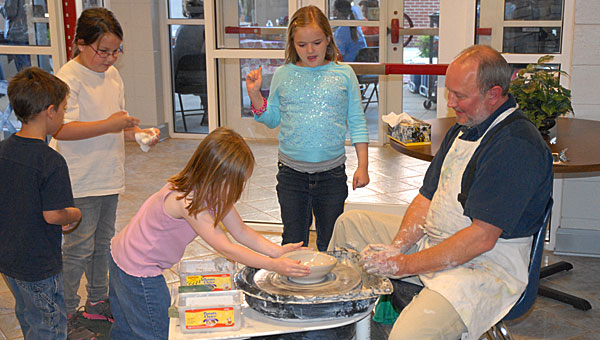 Student artwork ranging from self-portraits to decorated bicycles filled display areas near the lobby of Alabaster’s Meadow View Elementary School on April 12, as kids showed off the projects they have been working on all year.

“The kids always get thrilled about this event,” said MVES Assistant Principal Rachea Simms. “This is a great night. It gives parents a chance to see the artwork their kids have been working on all year.

“The show gets bigger every year,” Simms added.

Artwork from every student at the school was displayed in the hallways and in display areas near the school’s entrance.

Featured artwork included the sculpture “Alien Dog” by Elijah Williams, a sculpture of the World Trade Center towers by Joshua Fleming and Joe Toomey in memory of the Sept. 11, 2001 terrorist attacks and a painting titled “Robot Me” by Jackson Belcher.

Student artwork ranged from paintings of the Birmingham-Shuttlesworth International Airport to sculptures of tomahawks.

During the show, several local artists sold items such as wire butterflies and clay pottery, and other vendors painted and sold pictures on-site.

“Some of these vendors are actually teachers here,” Simms said.

MVES art teacher Jessie Cunningham taught kids how to use a pottery wheel, drawing a near constant crowd of children eager to form clay into a bowl.

The school also sold items such as art journals, bookmarks and balls of clay to benefit the MVES art department.