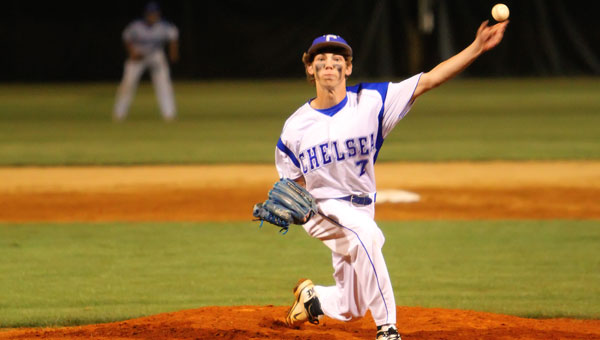 Hobbs, who knew he’d be on the mound three days later with a Class 5A playoff berth riding on the outcome, knew the Hornets had to put the loss in the past quickly.

The left-hander helped Chelsea clinch its first Class 5A playoff berth in four years after limiting Sylacauga to one run in a complete-game victory in the Hornets’ 4-1 win over the Aggies in their final area contest April 12.

“I’m just thankful to be in this position,” said Hobbs, who set a new school record with his ninth victory on the mound this season. “I was looking forward to today.”

Hobbs allowed only one earned run on four hits with four strikeouts and four walks in the victory.

Senior Matthew Graben, who signed a baseball scholarship April 11 with the University of Montevallo, provided the spark the Hornets needed with after stroking a two-run double down the left-field line in the bottom of the fifth inning, which broke a scoreless tie and gave Chelsea a 2-0 lead.

Hobbs drove in another run later in the inning with his sacrifice bunt.

Chelsea pushed its lead to 4-0 in the bottom of the sixth inning when Alex Dean doubled to right field and later scored on an RBI groundout by Brody Holder.

Sylacauga plated one run with a sacrifice fly in the top of the seventh inning before Hobbs ended the game with back-to-back strikeouts.

Chelsea coach Michael Stallings was all smiles following the game after leading the Hornets to their first playoff appearance in his tenure.

“It feels great,” Stallings said. “A lot of hard work and perseverance has finally paid off.”