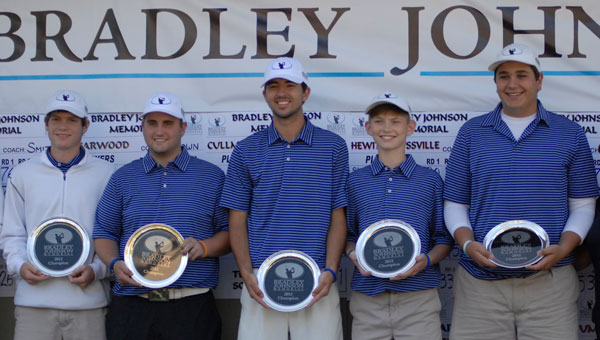 GREYSTONE — Spain Park High School sophomore Connor Smith knew he might have cost himself a chance to win the sixth annual Bradley Johnson Memorial golf tournament early in his round April 12 at the Greystone Golf and Country Club’s Legacy course.

Smith needed to clear away objects near his ball before his next shot on the third hole in the second and final round of the tournament. In the process, Smith moved his ball slightly trying to clear away a leaf.

“Nobody saw it, but I had to call (a one-stroke penalty) on myself,” said Smith, who moved to 2-over par after three holes.

Many golfers have lost composure following a self-imposed penalty, but Smith responded by shooting 4-under par through the final 15 holes to capture the individual championship in the tournament named after former Spain Park golfer Bradley Johnson, who died in a car accident in 2006.

After carding a 1-under par 71 in the opening round April 11, Smith fired a 2-under par 70 in the final round to post a tournament total 3-under par 141, which edged second-place finisher Taylor McCullum of Hoover by two strokes.

“I started making everything,” said Smith, who played at Briarwood Christian School last season. “I started bearing down.”

Robby Prater, the 2010 Alabama High School Athletic Association Class 6A individual champion, fired a 3-over par 147 and finished in a two-way tie for seventh overall. Prater carded a 1-under par 71 in the opening round and fired a 4-over par 76 in the second round.

First-year coach Ben Moody said the Jaguars didn’t need much advice from him in the two-day tournament.

Led by John Hayden, who fired a 9-over par 153 and finished in a five-way tie for 14th overall, the Lions edged many of the top teams in the state, including Mountain Brook.

“I was pulling for them,” Smith said. “I was proud of the way they played.”

Oak Mountain finished 15th out of 15 teams in the team standings.

Clay Nolen led the Eagles with his 15-over par 159, which placed him in a three-way tie for 33rd overall.

J.T. Watkins of Hoover posted the first hole-in-one in tournament history in the final round. Watkins used a 6-iron on hole No. 13, a 184-yard par three.

“I watched it all the way,” Watkins said. “I couldn’t believe it at first.”

Hornets battle to a tie with Panthers in soccer match