Wreaths Across America needs sponsors to honor our veterans 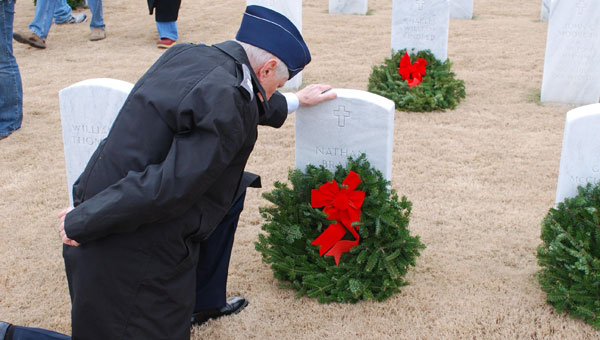 A volunteering member of the Civil Air Patrol pays respect to a former flying friend who died in a helicopter crash. (Contributed)

Morrill Worchester, owner of Worchester Wreath Co. of Harrington, Maine, won a trip to Washington D.C. as a 12-year-old paper boy, which forever changed his life. A lasting impression was made on the young boy when he visited Arlington Cemetery. He never forgot the multitude of graves of veterans who made the ultimate sacrifice for their country.

In 1992, Worchester Wreath had a surplus of wreaths at the end of the holiday season. Worchester remembered those graves and thought of a way to honor our country’s veterans – placing a wreath on their grave in remembrance of their sacrifice.

With the help of Maine Sen. Olympia Snowe, transportation provided by a local trucking firm from Maine to Virginia, Worchester placed hundreds of wreaths at Arlington on graves that had few visitors. Thus began Wreaths Across America.

Last year, Wreaths Across America came to the Alabama National Cemetery, located on U.S. 119 next to American Village in Montevallo.

The Blue Star Salute Foundation Inc., along with the support of the Bessemer Squadron of the Civil Air Patrol, is sponsoring Wreaths Across America to raise funds to place a wreath on every grave at the Alabama National Cemetery.

Sponsorships are greatly needed. To sponsor a wreath, send your check for $15, payable to BSSFI for Wreaths Across America, to BSSFI, P.O. Box 203 Harpersville, AL 35078. Include your name, address, email, and in honor/memory with your donation. All funds must be raised by the end of October.

On Dec. 25 at 10 a.m., the Wreaths Across America wreath laying will be held at all of America’s National Cemeteries, including the Alabama National Ceremony.

The wreaths will be on display from Dec. 15 to Jan. 15, 2013. For more information, visit Bluestarsalute.org.