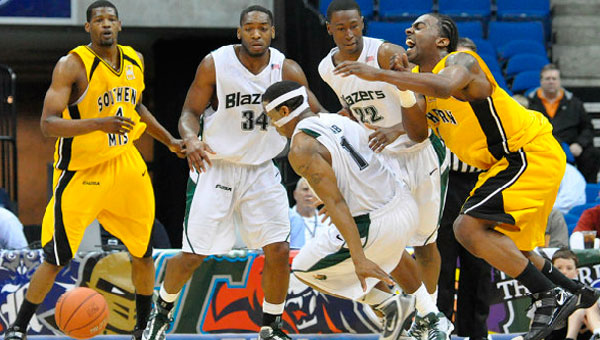 Drake, who wrapped up his collegiate playing career with the Blazers in 2010, spent his first three seasons at Vanderbilt University before transferring closer to home.

During his lone season at UAB in the 2009-2010 campaign, Drake played in 33 contests and made 18 starts for the Blazers while averaging 6.7 points and 3.2 rebounds a game.

Drake, who played 96 games during his previous three seasons at Vanderbilt, finished his career with 129 games played.

Since his final season with the Green and Gold, Drake has been working toward his master’s degree in health education, which he expects to complete this May.

In his spare time, Drake has worked with youth at summer camps and basketball clinics. Most recently, he was partnered with the Elite Hoops Basketball Organization, which is based in Atlanta, helping teach aspiring players basketball skills.

“I’m really excited about this opportunity,” Drake said. “God blessed me with this chance to come back here and be a part of the staff. I’m really looking forward to working with the coaching staff. Coach (Jerod) Haase and the assistants have a ton of knowledge and experience with the game. For me, as a young aspiring coach, I feel this is a great step for me and will only benefit me down the road.”

Haase, who was hired as the Blazers’ new coach last month, said he is looking forward to having Drake as a member of his coaching staff.

“George is a former UAB player and I think that connection to the city of Birmingham and the fan base will be fantastic,” Haase said. “Through the interview process, everyone told me he is an extremely hard worker and loyal, and that’s exactly what he’s been so far.”

Drake was named the Alabama High School Athletic Association Class 2A Player of the Year following each season at Calera in 2003, 2004 and 2005. Drake finished runner-up in voting for the Alabama Sports Writers Association Mr. Basketball following his senior season in 2005.