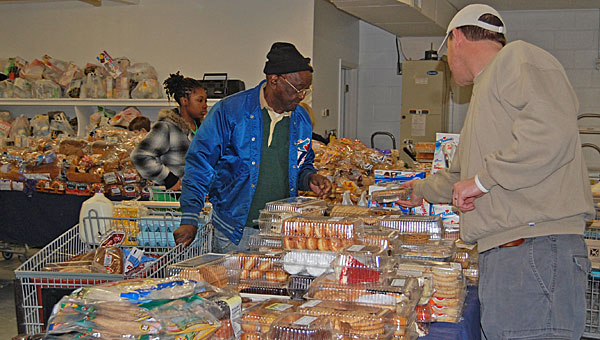 Alabaster's Manna Ministries, which provides free food to those in need every Saturday at a building off Alabama 119, is preparing to move to the Alabaster First United Methodist Church Restore building. (File)

Over the past several months, Manna Ministries Building Manager Wayne Blankenship has seen the problem getting worse.

“We’ve just outgrown our building. We’ve got to have more room,” Blankenship said.

“A lot of people are struggling right now. We’ve just run out of room where we are,” Blankenship said.

Manna Ministries volunteers have been working with Alabaster First United Methodist Church officials over the past several months to work out a deal to move the charity’s weekly food giveaways to the church’s Restore building.

Restore, which contains a large worship auditorium and classrooms for the church’s youth, was constructed in a former Winn Dixie building in the Alabaster Market Place shopping center.

The church is only using a portion of the old grocery store, leaving a large warehouse area and loading dock in the back of the building. The church also inherited several coolers and freezers previously used in the grocery store.

“It’s taken us a while to get the money to get the fridges and freezers fixed,” Blankenship said, noting the equipment will allow the charity to store items such as milk and meat longer. “We’ve had a lot of prayers answered. Everyone has been working together to make this happen.”

“People won’t have to get in their cars and drive down the road anymore,” Blankenship said. “I’m just wide open. I’m very excited about this. We are going to have an opportunity to feed more folks.”