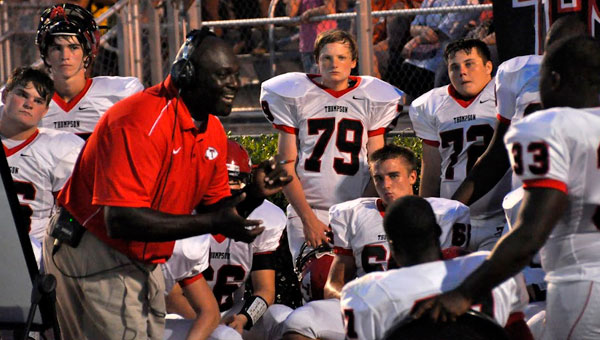 Mike Montgomery has been named the head coach of the Thompson High School football team. The move came a few weeks after he was named the interim head coach following the resignation of former head coach Caleb Ross.

THS Principal Dr. Danny Steele previously said the school planned to take applications for the head coach position at the end of the school year.

“However, it is already clear to me that Coach Montgomery is the right man at the right time to keep our program moving forward,” Steele wrote in an email to THS parents. “As a six-year veteran of the Thompson coaching staff, coach Montgomery understands the challenges, the opportunities, and the tremendous potential of our program.

“Not only are we confident that coach Montgomery has the experience and skills to lead our football team, but making the decision at this time allows our staff and players to go through spring training with a clear sense of direction,” Steele wrote.

Montgomery previously served as the Warriors’ offensive line coach and running game coordinator, and has been a member of a the THS coaching staff since 2006.

Montgomery began his coaching career as a graduate assistant at Mississippi State. Montgomery, who has coached at Meridian (Miss.), Walker and Tuscaloosa County high schools during his 15-year career, also coached two seasons at Benedict College in Columbia, S.C., and served as a professional scout for the Canadian Football League for two years.

Montgomery and his wife Pam have two children, Nicholas and Kylah.

“Coach Montgomery understands football, but more importantly he understands young men, and he knows what it takes to develop winners on and off the field,” Steele wrote. “We remain very excited about the future of Warrior football.”

Montgomery will be Thompson’s third coach in three years next season. Bruce Hill stepped down following a 1-9 season as the Warriors’ interim coach in 2010. Ross led the Warriors to a 2-8 record last season.