Michael and Laura Hodges of Birmingham are pleased to announce the engagement of their daughter, Heather Hodges, to Stephen Davis, son of Charlotte Davis of McDonough Ga. and Mike Davis of Vero Beach, Fla.

The bride-elect is the granddaughter of Don and Sandra Taylor of Columbiana, Clyde Hodges of Buford, Ga. and Barbara Green of Lawerenceville, Ga. She is a 2007 graduate of Chelsea High School. Heather graduated from Auburn University in 2011 with a bachelor of arts degree in communications. 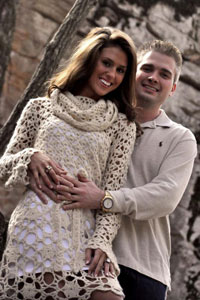 The future groom is the grandson of Enos Holmes of Sylacauga, the late Fannie Lou Holmes of Bynum and the late Mr. and Mrs. Charles William Davis of Palmetto, Ga. Stephen is a 2006 graduate of Eagles Landing High School and a 2010 graduate of Auburn University. He attained a degree in business/finance. He works as a vice president of Davis Development and is president of Davis Exploration.

The wedding is planned for May 26, 2012. After a honeymoon to Seychelles and Dubai, the couple will reside in Atlanta, Ga.