Local WWII veteran shares about past 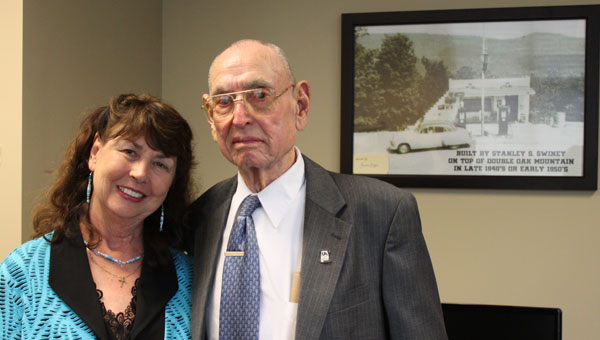 Sandra Cooper and her father, Stanley Swiney, stand near the photograph of the gas station Swiney built by hand. (Reporter photo/Christine Boatwright)

CHELSEA – A black-and-white photo of a gas station hanging in the Chelsea Historical Museum holds more meaning than meets the eye.

The Swiney family lived at the foot of Double Oak Mountain, and Stanley Swiney owned a plot of land on the top of the mountain, which is now the entrance to Highland Lakes subdivision on U.S. 280.

Swiney, 93, walked up the mountain every day to work on the station.

“My mother told me that,” daughter Sandra Cooper said. “It was by himself time, and it was like a therapy, too.”

Swiney said he isn’t sure why he decided to build the station, but the full-service gas station offered oil changes, tire checks and windshield cleanings.

“It was standard then,” he said of the extra service. “Back in those days, cars and trucks came up that hill running hot. Those barrels out there were to fill up the radiator. I can remember when it was a dirt road.”

Swiney was born in Coalmont, which is near Montevallo, and was drafted into the Army as a young man.

“The Army was a little bit rougher than I expected,” he said.

Cooper said her father recently explained why he didn’t talk about the war after returning home to Shelby County.

“He did not want people to know how bad it was,” she wrote in a letter. “He and others left and went to a foreign country to save us and their family and friends from having to face things that could have happened here.”

Swiney came home with a Purple Heart, which he recently showed to his grandchildren.

The Chelsea Historical Museum is open on Sundays from 2-4 p.m. and by special appointment. For more information, call Chelsea City Hall at 678-8455.