Zow wants to be source of inspiration 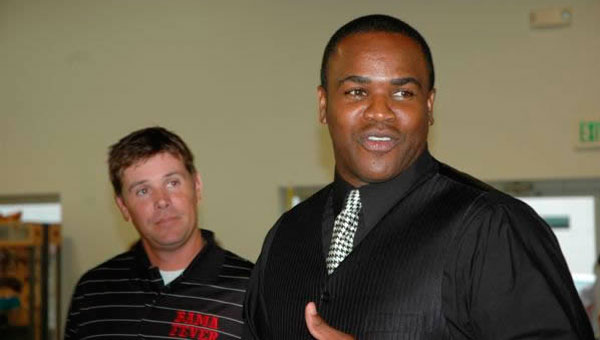 Former University of Alabama quarterback Andrew Zow, right, was approved by the Shelby County Board of Education during a board meeting tonight as a new teacher at Montevallo High School with head football coaching responsibilites. Zow is the first African American teacher with head football coaching responsibilities approved the Shelby County Board of Education. (Contributed)

Andrew Zow has become a source of inspiration for his new players before his first official team meeting after being approved by the Shelby County Board of Education as a new physical education teacher with head football coaching responsibilities April 19.

Montevallo players can draw encouragement from Zow, the first African-American teacher with head football coaching responsibilities approved by the Shelby County School System in its history according to Montevallo athletic director Brent McCaleb, simply by taking a look at his career path. Zow, who has previous head coaching experience at his alma mater, Union County High School in Lake Butler, Fla., spent one season as an assistant coach at Oak Mountain last year before being offered the head coaching position at Montevallo.

Zow never let any barriers stand in his way, and he wants the youth in the Montevallo community to dream big, too.

Zow, a former quarterback at the University of Alabama, was unanimously approved by the board to replace Jamie Williams as a physical education teacher and the head football coach at Montevallo. Williams will transition to Zow’s former position as a health teacher at Oak Mountain High School.

McCaleb couldn’t hide his enthusiasm moments after learning about Zow being approved by the board.

“I’m grinning ear-to-ear,” McCaleb said. “We sought out Andrew. We felt like he was the best fit for what we needed.”

Zow, who was equally excited, said he’s looking forward to his serving as the Bulldogs’ head coach.

“I’m very excited to be part of the Montevallo community,” Zow said. “I can’t wait to get to know the kids on a personal level.”

Zow spent three seasons as the head coach last decade at Union County High School before stepping down to focus on his responsibilities as the president of Andrew Zow and Associates, a corporation that associates themselves with manufacturers and suppliers in the utility and automotive industries.

After devoting a few years to his business, Zow said his wife, Amebriss, encouraged him to return to his passion.

“My wife always told me I’m supposed to be coaching,” Zow said. “It’s something I’ve been looking forward to.”