It would be interesting to know how many kids in this area have attended Corky Bell Dance Studio. Not only ballet and tap, but pointe, jazz and hip-hop fill the needs of students.

Co-owners Brenda Johnson and daughter Robin Stapleton bought the top floor of the building on 719 Fourth Place after seeing it was perfect for their needs. Three huge rooms, plenty of closets, supply shelves and an easy-to-access location have meant 18 years of living their dream at this same location. 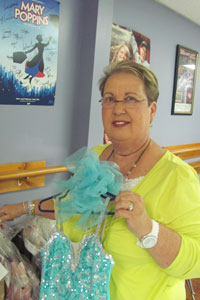 Brenda Johnson displays one of this year’s outfits. (Contributed)

The No. 1 priority for students is to gain a love and appreciation for music.

“We want our students to love what they do and to look forward to each practice and performance,” Johnson said.

Although Robin is on a temporary leave, her mom has it covered. With years of organizational skills, Brenda orders costumes, keeps the books, travels to tape much of their music, is counselor, first aid director, travel coordinator and janitor. Her days start early and end late.

Brenda and Marvin Johnson were high school sweethearts at Vigor High School in Prichard during the late 1960s. A job move brought them to this area in 1976, where they have resided in the same home on Eighth Avenue all these years. Baby girl, Robin, was 2 and already into dance. Later at Thompson High School, she was well known as a dancer and twirler.

Always in the back of Robin’s mind was the idea to own a studio and to help give back what she had experienced. Competition, titles and awards, along with clippings, posters and souvenirs abound throughout the studio.

The competition team will perform at the Disney World Gala Parade in June. On April 14, the groups competed at the Alabama Theater, where they won two Platinum Awards and ranked first place overall.

Sixteen years ago, at the beginning of their ownership, Brenda and Robin passed out flyers in Alabaster, Pelham, Calera, Montevallo and surrounding areas. They started with 65 students. Today they have 220 students from ages 2 and up.

Johnson and her husband are “parrot heads,” following the Jimmy Buffett circuit whenever possible. They love to relax at “Margaritaville” in Panama City as ‘50s music and Buffett music are their favorites.

Bell has a talent for children

By SANDRA THAMES / Community Columnist Bessie Bell grew up in Bibb County the middle child of 13 children. Her... read more