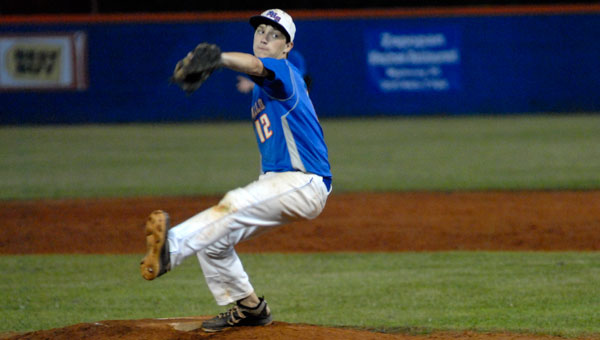 Montevallo High School sophomore Chase Hamrick delivers a pitch to the plate in a game against B.B. Comer in the first round of the Alabama High School Athletic Association Class 3A playoffs April 20. (Reporter Photo/Wesley Hallman)

The Bulldogs, who dreamt of hosting a first-round series in the Alabama High School Athletic Association Class 3A playoffs, wanted an improved ballpark to show off in front of blue and orange faithful.

Montevallo sophomore Chase Hamrick and his teammates spent every free minute during weekdays at the park bringing in fresh planks of wood to construct a new outfield wall. Team members gathered at the park on the weekends to paint the newly-constructed fence in team colors, with a sea of blue with orange trim spreading from one end of the outfield to the other.

The Bulldogs shined in the renovated facility in a sweep of B.B. Comer in the opening round of the AHSAA Class 3A playoffs. Montevallo battered their opponent  in a 6-2 win in the opener and a 19-1 victory in the nightcap in front of a packed crowd.

Montevallo picked up a series win in its first time in the playoffs in five years.

“It’s great for our guys,” said Montevallo coach Trey Simpson. “I’m glad the guys are reaping some of the rewards of their hard work. They’ve worked their tail off and they’re expecting good things to happen.”

The Bulldogs defeated B.B. Comer 5-2 in the series opener.

Senior Taylor Burr led Montevallo offensively as he finished 2-for-4 at the plate with a double. Burr, who drove in two runs and scored one run, also had a stolen base.

Trevor Chatham earned the win on the mound after giving up one earned run on six hits with five strikeouts and one walk in six innings.

Burr closed out the game and gave up one earned run on one hit in one inning in relief.

Montevallo completed the sweep with a 19-1 win in the nightcap.

Hunter Nabors led the Bulldogs offensively as he finished 3-for-4 at the plate with a pair of doubles. Nabors drove in four runs in the victory.

Zach Smith finished 3-for-3 at the plate with a double. Smith also drove in one run and finished with two stolen bases.

Burr went 3-for-3 at the plate with a pair of stolen bases and scored two runs.

Hamrick earned the win on the mound after giving up one unearned run on one hit while recording 10 strikeouts without issuing a walk in a five-inning complete game.

Montevallo (25-5) will host Leeds in a best-of-three series in the second round of the AHSAA Class 3A playoffs April 27-28. The two teams will meet in a doubleheader April 27 with the first game scheduled for 4:30 p.m. and the nightcap set for 7 p.m. The if-necessary game will be held April 28 at 1 p.m.