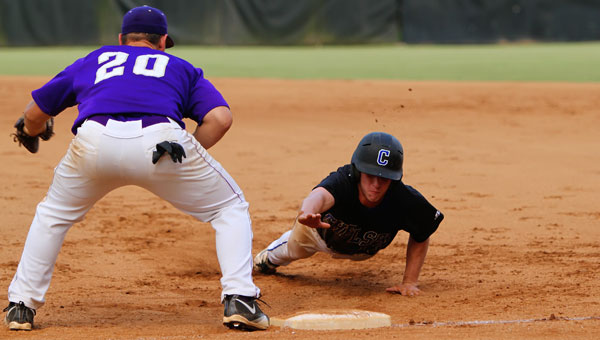 Chelsea High School baserunner Nathan Roddy heads back to first base during a game against Hueytown in the first round of the Alabama High School Athletic Association Class 5A playoffs April 20, (Contributed/Cari Dean)

The Chelsea High School baseball team ended its season with back-to-back losses to Hueytown in the first round of the Alabama High School Athletic Association Class 5A playoffs April 20.

The Hornets fell to Hueytown 3-0 in the opener.

Chelsea managed only one hit against the Golden Gophers in the loss.

Eli Bashour led the Hornets offensively as he finished 1-for-3 at the plate.

Joey Mock took the loss on the mound after giving up three runs, including one earned run, on three hits with four strikeouts and four walks in 5 2/3 innings.

Alex Dean recorded the final out.

Chelsea fell to Hueytown 13-1 in the nightcap.

Davis Shoemaker and Keelan Gregg led the Hornets with two hits each as each finished 2-for-3 at the plate.

Nathan Roddy went 1-for-1 at the plate, while Brody Holder finished 1-for-3 at the plate.

Shoemaker drove in the Hornets’ lone run with an RBI single, which drove in teammate Eli Bashour.

Tripp Hobbs took the loss after giving up six runs, including five earned runs, on seven hits with one walk in 3 1/3 innings.

Ross Ham allowed three runs, including one earned run, on one hit with one strikeout and three walks in 2 1/3 innings.

Connor McVay allowed four earned runs on five hits with two strikeouts in one inning. Shoemaker gave up one hit before recording the final out.