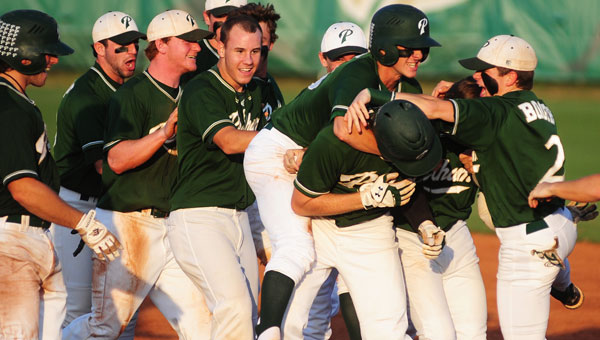 The Pelham High School baseball team swept Hillcrest-Tuscaloosa in the first round of the Alabama High School Athletic Association Class 6A playoffs April 20.

The Panthers defeated Hillcrest-Tuscaloosa 2-1 in eight innings in the series opener.

Tanner Jackson drove in Parker Curry with his two-out RBI single in the bottom of the eighth inning.

Hunter Soleymani earned the win on the mound after giving up just one run on four hits while recording 12 strikeouts in a complete-game victory.

Pelham defeated Hillcrest-Tuscaloosa 16-2 in five innings in the nightcap.

Pruitt and Fletcher Johnson led the Panthers offensively with three hits each.

Pierce, Jackson, Soleymani and Thomas Lowery added two hits each in the victory. Sam Finnerty finished with one hit. Hunter Stovall, who had a sacrifice fly, drove in two runs and scored one run in the win.

Lowery earned the win on the mound after giving up two runs on four hits while recording five strikeouts in a five-inning complete-game victory.

Spain Park High School senior Hunter Hall delivers a pitch to the plate in a game against Minor in the... read more