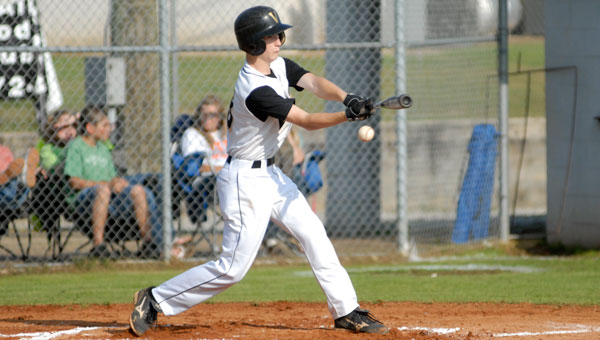 Vincent High School freshman Kade Carroll swings at a pitch during a game against Woodland in the first round of the Alabama High School Athletic Association Class 2A playoffs April 20. (Reporter Photo/Wesley Hallman)

VINCENT — Vincent High School baseball coach Dwight Spradley delivered a post-game message to his players full of hope for the future following a pair of losses against Woodland in the first round of the Alabama High School Athletic Association Class 2A playoffs April 20.

Addressing a team filled with freshman and sophomores, Spradley told his players not to let their bitter first taste of the playoffs linger.

“If they’re going to get us,” Spradley told his team, “they better get us now.”

The inexperienced Yellow Jackets gave Woodland all it could handle in a 7-1 setback in the series opener and a 5-0 loss in the nightcap.

A few youthful mistakes were the only thing separating the two teams, Spradley said.

“This was an excellent experience for our team,” Spradley said. “They were obviously more experienced than us. It definitely showed in the game.”

The Yellow Jackets dropped the opening game against Woodland 7-1.

Jacob Fields led Vincent offensively as he finished 1-for-1 at the plate and drove in one run. Fields entered the game in the bottom of the seventh inning as a pinch-hitter and promptly drove in teammate Michael Gilham for the Yellow Jackets’ lone run in the series.

Kade Carroll took the loss after giving up seven runs, including six earned runs, on 13 hits with two strikeouts in five innings.

Chase Howard gave up just two hits with one walk in two scoreless innings in relief.

Vincent fell to Woodland 5-0 in the nightcap.

Jeremiah Gage and Quartez Walker led the Yellow Jackets offensively with one hit each.

D.J. Brasher took the loss on the mound after giving up five runs on seven hits in a complete-game effort.

Spradley said his youthful team grew up down the stretch on its way to the AHSAA Class 2A, Area 10 championship. Vincent (10-18) entered the playoffs 8-3 in its final 11 regular season games.

“Our guys got better as the year progressed,” Spradley said.