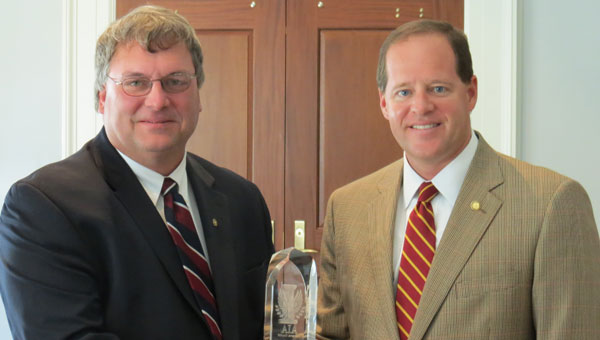 State Sen. Cam Ward has been named Legislator of the Year by the Alabama Chapter of the American Institute for Architects.

AIA Executive Director Larry Vinson said that Ward’s work with the business community of passing historic tort reform measures last year made him their choice for Legislator of the Year. As chairman of the Senate Judiciary Committee, Ward helped push legislation that reformed the statute of limitations and repose regarding the timeframe for which lawsuits can be filed against businesses.

In addition to this legislation, Ward was also instrumental in spearheading four other tort reform measures during the 2011 legislative session.

“I am honored by this award and have always enjoyed working with the business community on issues important to the State of Alabama. I look forward to our continued work in creating a pro-business climate for our state,” said Senator Ward.

By NEAL WAGNER / City Editor The Alabaster City Council likely will vote during its May 7 meeting on a... read more