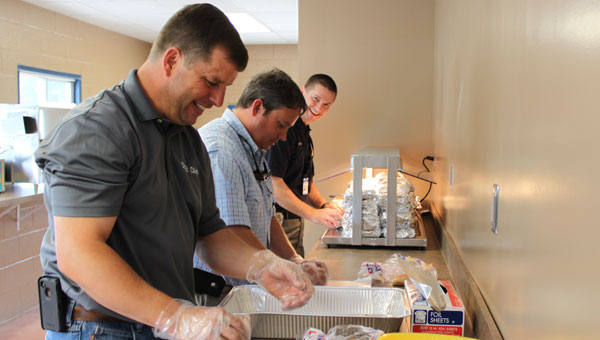 CALERA – With “ready to open” posted from the Health Department on the wall, Calera’s new concession stand held its first trial run April 27.

City department heads cooked and served hotdogs, fries and drinks to city employees, park board members and the City Council during the trial run.

About a year ago, Graham was approached to update the concession stand bathrooms to meet ADA requirements.

“We also needed to update the concession stand with a commercial kitchen, and the City Council was generous to approve $250,000 for the project.”

The concession stand sports handicap-accessible bathrooms, which will stay open even when the park isn’t in use.

“We’re having a trial run to test the kitchen and equipment,” Graham said. “We had a generous donation of food from Sav-Mor here in Calera.

“At least 90 percent of our employees had a hand in building this,” he added. “This is just a token of appreciation. They worked hard on this project.”