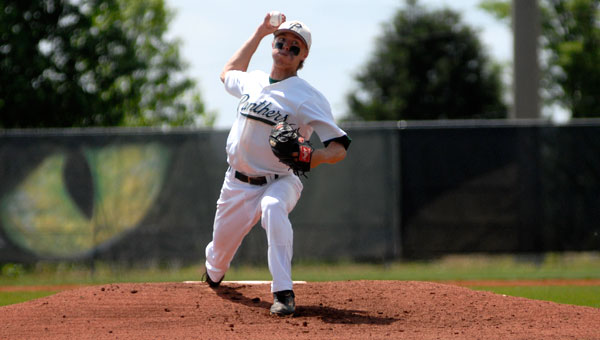 Pelham High School senior Parker Curry delivers a pitch to the plate in the Panthers' 7-5 win over Hoover in the third and deciding game of the Alabama High School Athletic Association Class 6A second round playoff series April 28. (Reporter Photo/Wesley Hallman)

PELHAM — Pelham High School senior Parker Curry’s pitching line in the box score may not impress anyone following the Panthers’ 7-5 victory over Hoover in the deciding third game of an Alabama High School Athletic Association Class 6A playoff series April 28.

However, those who witnessed his performance on the mound knew it was his grit and determination that helped the Panthers advance to a meeting with Spain Park in the third round of the Class 6A playoffs May 4-5.

Curry labored through the early innings before settling in down the stretch as he gave up just three runs on seven hits over six innings in the win.

“It was rough,” Curry said. “I didn’t have my best stuff. The defense played great behind me.”

Mauldin agreed with his pitcher’s assessment. However, Mauldin said Curry did have the most important factor — experience — working in his favor.

“He just showed senior leadership,” Mauldin said. “He showed a lot of guts.”

The Panthers jumped out to an early 1-0 lead in the bottom of the first inning after Ty Pierce led off with a double and scored on a RBI single by Hunter Soleymani.

Hoover responded with two runs in the top of the second inning before a three-run double by Pierce gave Pelham a 4-2 lead in the bottom half of the inning.

The Buccaneers cut the deficit to one run in the top of the third inning. Curry lined a sacrifice fly to center field in the bottom of the fourth inning, which plated Hunter Stovall and gave the Panthers a 5-3 cushion.

Pelham extended its lead to 7-3 in the bottom of the fifth inning following back-to-back RBI singles by Stovall and Pierce.

Hoover loaded the bases in top of the seventh inning and plated two runs to cut the deficit to 7-5 following a ground-rule double, but the Buccaneers grounded into a double play to end the game with the tying runs stranded on base.