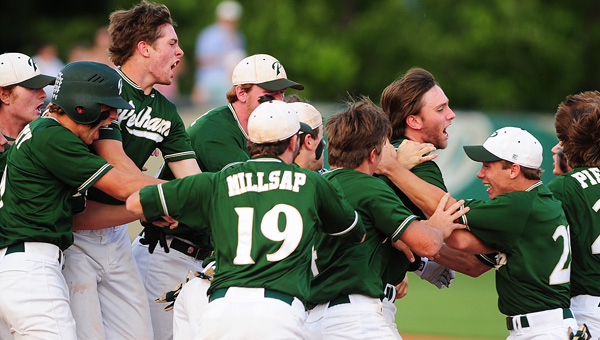 PELHAM — The Pelham High School baseball team used some clutch hitting to take the first game of its Alabama High School Athletic Association Class 6A playoff series against Hoover, but the Buccaneers returned the favor later with some late drama of their own to split the post-season doubleheader April 27.

The Panthers and the Bucs will battle in the third and deciding game in the series April 28 at 11 a.m.

The Panthers took the early lead in the second inning in Game 1 when Hunter Stovall roped a single to right to plate Sam Finnerty for a 1-0 advantage.

The Pelham run stood until the sixth when Hoover’s John Maxwell brought home Patrick Conway to tie the game heading into the final inning.

The Bucs put two men on base with one out before Michael Powers dropped a single to left-center field to give Hoover a 3-1 lead.

The Panthers didn’t back down and responded with a two-out rally in the bottom of the seventh led by the top of the lineup. Leadoff man Ty Pierce drove home Jackson Pruitt to pull the Panthers within one, then Parker Curry followed with an RBI double to left to tie the game 2-2.

Tanner Jackson followed with a single to left which the Hoover defender wasn’t able to handle to allow Curry to score without a play at the plate to give the Panthers the 4-3 walk-off win.

“Our kids clutched up after being down two runs with two outs,” Mauldin said on the seventh inning rally. “They showed a never give up attitude and tremendous character in that situation.”

Curry had a complete night for the Panthers in scoring the game-winning run while picking up the win on the mound with two-thirds of an inning pitched with two strikeouts.

Matt Barnes took the loss for Hoover allowing three runs on four hits in the seventh.

The Panthers kept the momentum going from game one into game two of the doubleheader by scoring three runs in the top of the first inning led by a Pierce double and RBIs from Jackson, Johnson and Finnerty.

Hoover chipped away at the Pelham lead with a run scored in the third and two more in the sixth to set up more seventh inning drama with the game tied 3-3.

After the Panthers left a man in scoring position, the Bucs attacked in the bottom half of the inning. Nathan Richards and Sam Gillikin reached base on back-to-back bunt singles which Connor Short followed with a one-out walk to load the bases for Hoover. Patrick Conway pushed a bunt down the first base line for a bunt single of his own to plate Richards for the game-winning run to tie the playoff series 1-1 and setting up a deciding Game 3 on Saturday.

“They didn’t hit the ball all that well in the (seventh) inning, but tip your hat to them for putting it in play,” Mauldin said on the Hoover offense in the final inning. “They put it where we couldn’t field it and that’s the breaks of the game.”

Pierce led Pelham finishing Game 2 4-for-3 with a double and a run scored.

Chase Brashier took the loss for the Panthers allowing a run on three hits in the seventh inning. Hoover’s Jacob Whitehead picked up the win with one inning of work and allowing just one hit.