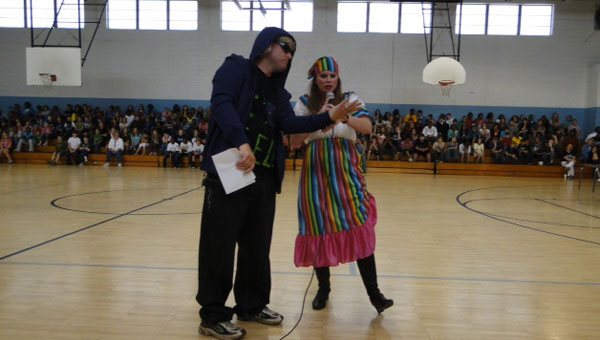 Could anything be more exciting for Calera Middle School students than a personal appearance from Justin Bieber? There is. It’s principal Brent Copes impersonating Bieber.

Copes and his faculty held an academic pep rally in the school’s gym April 6 to motivate students for the Alabama Reading and Mathematics Plus Test (ARMT+).

Skits were prepared and acted by faculty members to motivate students to exhibit excellence, perseverance and determination during the week of testing.

One skit enacted the first day of football practice. The team ran into the gym fired up about practice, but at the end of the day they were on the floor exhausted. The second scene portrayed the first game and they lost because some players didn’t put forth effort. The final scene was a re-make of the game and demonstrated teamwork wins the game.

Students cheered for special guest “Madam Who Can See All Things” (aka fifth grade teacher Amanda Harrison), who made an appearance to predict the outcome of test scores.

Last year using a crystal ball (Copes’ head) she predicted success and was correct. This year she read the great, powerful Justin Bieber’s palm and received a good feeling that students would perform equally well.

“The school has a math coach and a reading coach, and we held monthly data meetings to survey Think Link reading and math testing in order to determine if students are proficient in those subjects,” Parker said.

Copes said two weeks prior to spring break they did a “blitz” to take one final look at areas students needed to work on.

“Every teacher gave 30-minute lessons in reading and math to give them that extra boost they need and motivate them to do the very best they can,” he said. “Parents had data of their child’s progress so they could help as well. We want to give our students every advantage possible.”