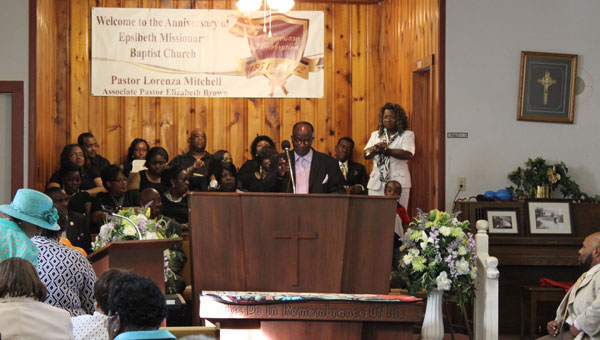 ALDRICH – Epsibeth Missionary Baptist Church in Aldrich was founded only seven years after slavery was abolished. On Sunday, April 29, the congregation celebrated the church’s 141st anniversary.

Epsibeth Baptist, which is located off Shelby County 204 in Aldrich, was established in 1873 by William Farrington Aldrich, the owner of the Aldrich coalmines at that time, according to Henry Emfinger, owner of the Aldrich Coal Mine Museum. Aldrich built two churches for the community, and gave one building to the black community. The building became Epsibeth Missionary Baptist Church.

The church served as a school, and the congregation continues to meet in the original sanctuary building.

Emfinger presented two historical photographs of the church on behalf of the coal mine museum.

“There are five churches in this little, old town,” Emfinger said. “We’re going to be here for the 150th anniversary.”

Montevallo Mayor Ben McCrory presented a proclamation from the city of Montevallo to the church.

Only seven pastors have led the Epsibeth congregation over the past 141 years. Pastor Lorenza Mitchell has ministered at Epsibeth for 31 years.

“We’ve done remodeling and added the fellowship hall and central air,” Mitchell said. “They had a stove when I got here. They had to burn wood.

“I just think God blesses this building,” he added. “It’s a miracle.”

Mitchell said he tried to leave his position one time.

“I couldn’t eat or sleep,” he said. “God wants me to stay here. I wouldn’t have stayed here this long if not for the people. You can feel the love around here.”