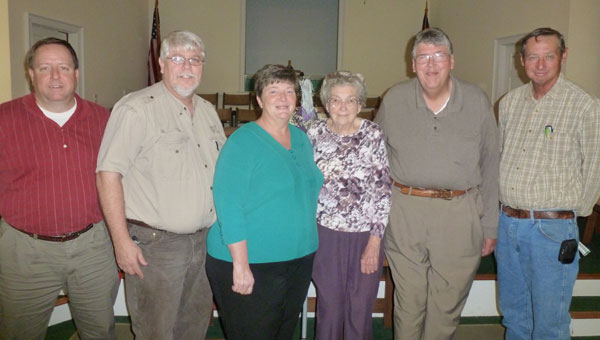 Fourmile Baptist Church, located on Shelby County 61, in Wilsonville will celebrate its 188th birthday at the homecoming celebration Saturday, May 5. The memorial service starts at 10 a.m. followed by a covered dish lunch and fellowship. The service will be led by current pastor Bro. Roger Chambers, and featured speaker will be Bro. Elvin Liveoak, pastor from 1962-1968.

Fourmile (Bethesda) Baptist, organized in Aug. 25, 1824, is the oldest continuous functioning church in the Shelby Baptist Association and one of the oldest churches in Alabama. Bethesda Baptist Church’s name was changed to Fourmile Baptist Church on Sept. 6, 1913, according to church minutes. Homecoming was settled to be the first Saturday in May on Feb. 1, 1913.

“Fourmile is a loving and giving church,” said Chambers. “It is very mission-minded.”

Emmie Wilder McDonald, who was born during the church’s centennial year on Dec. 7, 1913, is the oldest active member. She graduated from Shelby County High School in 1942 engaged to fiancé Dewey McDonald. They were married shortly after graduation and raised their children in the church: Randy, Tommy and Nancy.

“The church is my life,” said Emmie. “I have served in every area in the church.”

Emmie’s great-grandparents, W. W. and Louisa Armstrong and Thomas Stone and wife, were early settlers of Fourmile and members of the church. W. W. was the fourth pastor of the church. Her grandparents, David Stone married to Haseltine Seals Armstrong, were members, as were her parents, Ellie Stone Wilder and Cicero Austin Wilder. Emmie was baptized in the church on June 5, 1932.

Janet Parsons (Chip) has been the church pianist since Sept. 10, 1972 and is homecoming chair. Her ancestor Hosie Holcombe was a founding member of the church. Parsons comes from a family with deep roots in Fourmile: great-grandparents S.P.M. and Idella Fancher, grandparents Clyde C. and Beulah Fancher and parents Mary Fancher Farmer and Billy Farmer.

“I cannot imagine going anywhere else to church,” said Parsons. “It is home.”

By PHOEBE DONALD ROBINSON / Community Columnist John Tower is 100 years old and has attended many pageants over the... read more