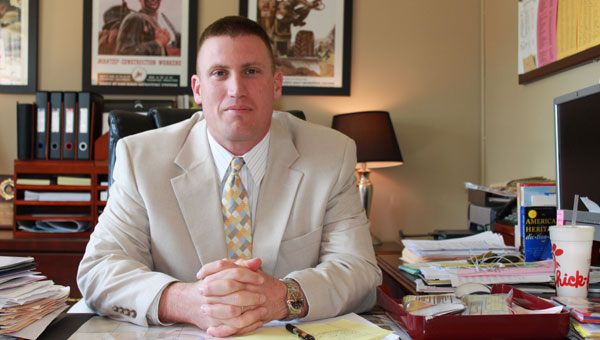 Dearman was in the Navy National Guard before joining the Army National Guard. He has served in the military for 14 years, and hopes to serve for at least six more. He served in Iraq in 2005 while working as the assistant principal at Oak Mountain High School.

While in training, Dearman had no communication with his family or the school for eight weeks, but said he had plenty of “good people” to take up administrative responsibilities at MHS.

“Montevallo is a fourth of the size of Oak Mountain High School,” he said. “It’s a nice, nice change. The community members are accessible and the mayor and police chief stop by. The partnership we have with the university is outstanding.

“I love Montevallo,” he said. “It’s a wonderful small town and a great-sized high school. You really get to know the students.”

Dearman said his military training prepares him for his position as principal.

“Army officer candidate training prepares you to lead — lead soldiers and lead young people. It helps you make decisions under pressure,” he said. “Our kids here can benefit from any of the branches of the military. I can say to students, ‘If I can do it, you can definitely do it.’”