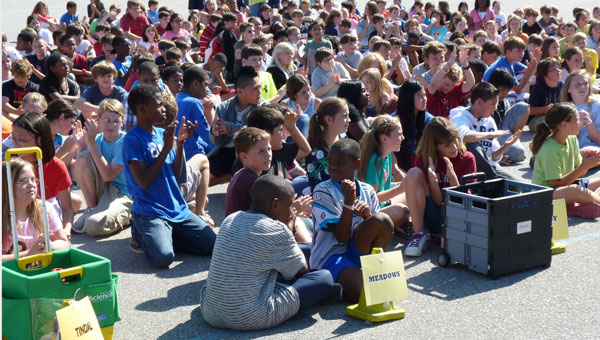 Students applaud while taking a break during the Walk Away From Bullying at Oak Mountain Intermediate School April 30. (Reporter photo/Amy Jones)

NORTH SHELBY — About 700 students walked a makeshift track outside Oak Mountain Intermediate School the morning of April 30 to bring attention to bullying.

The event, called the Walk Away From Bullying, was part of the culmination of a year-long effort to teach OMIS students about the negative effects of bullying.

“Bullying has become a major issue,” Blackerby said, referencing national incidences of student suicide after bullying. “We wanted to teach them what to do if they are bullied and teach them how to stand up for others.” 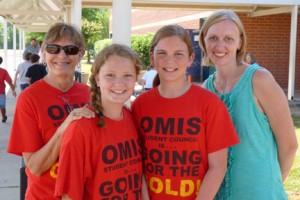 At the beginning of the year, the student council voted to work to counteract bullying at the school, Blackerby said.

The effort has paid off with a noticeable decline in bullying at OMIS, Blackerby said.

Student Council President Emily Rush, 11, said she felt holding events such as Walk Away From Bullying were important to help students fight bullying.

“It’s important because we don’t want kids being mean to each other and carrying that on to the middle school,” Rush said.

Rush said she’s noticed students at OMIS building relationships instead of making fun of each other.

Student Council Vice President Clara Fuller, 11, said once she heard there were problems with bullying, she was determined to do her part.

“The teachers have been telling us there were problems with bullying, and we’re trying to make our school a little better,” she said. “I think it’s really important for everybody to get the message.”

Throughout the year, the school held fundraisers to raise money for anti-bullying programs and school activities. The OMIS community raised enough money to purchase Kona Ice treats for every child at the school April 30.

Blackerby said the school’s physical education department pitched in by setting up the Walk Away From Bullying.