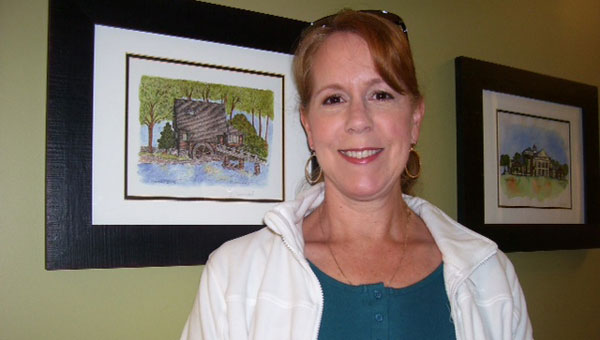 While growing up in Chicago, Vicki Carmichael was always painting something. As a 9-year-old, she set up her “art workshop” in her family’s basement, where she and neighborhood kids painted, sculpted and invented creations to sell at family garage sales.

Later, while majoring in elementary and special education at a small liberal arts school, she satisfied her “artistic appetite” through electives in drawing and silk screening.

After college she taught creative writing and worked in youth ministry in California, where she met her husband, Don. They moved to Birmingham in 1996, then to a small horse farm in Chelsea eight years ago.

Vicki taught art at Cornerstone School in Columbiana for a while, and taught homeschoolers sculpting in her “Art in the Loft” class held in her barn loft.

The couple has four daughters, all artistically talented, mostly in music and song writing. The older girls, now students at Auburn University and Chelsea High, were toddlers when Vicki sketched a picture of the church building where they attended Mom’s Day Out, and had it printed on cards as teacher appreciation gifts. She was invited to sell her cards at the school’s Spring Festival, and thus began her art business “Familiar Places.”

She has sold note cards and prints of local buildings at festivals in North Shelby, Mountain Brook, Mentone and south Alabama towns. Several of her watercolors of buildings, including Chelsea City Hall and the old Weldon store near City Hall, grace the hallway of Dr. Justin Fogo’s Chelsea Chiropractic Center. Some also hang at Ecclesia Coffee House.

At first, Vicki’s drawings were mainly detailed pen and ink drawings, but she loves color, and found a way to add color and keep the detail.

“I pen and ink on watercolor block and then paint watercolor on top,” she said.

She is presently in the process of developing a website for her “Familiar Places” business. She may be contacted on Facebook or at vickicarmichael29@gmail.com.