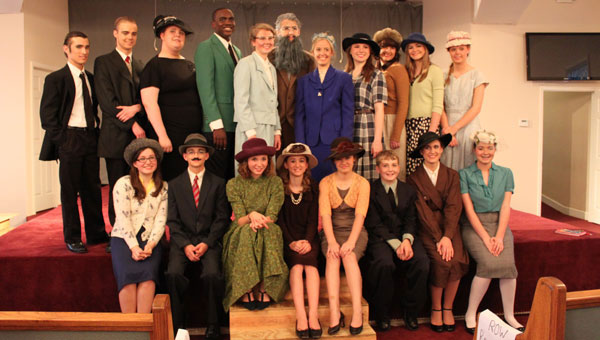 The drama is based on Corrie ten Boom’s autobiography of the same name. The church’s youth portrayed ten Boom and her family, a Dutch family, as they hid Jews during Hitler’s Holocaust in the early- to mid-1900s. The ten Boom family was arrested in 1944 for protecting Jews in their home.

The play concluded with Corrie ten Boom being released from a concentration camp and forgiving a woman, referred to as “the Snake,” who served as a prison guard in the camp.

“It’s a true story. These events actually happened,” Pastor Jim Thompson said. “What could cause a woman like Corrie ten Boom to forgive a guard like the Snake?”

The theme of forgiveness threaded through the play.

“It’s about forgiveness and love, which is a message the world needs right now,” said Drama Director Jody Tedeton.

“It’s a great way for the kids to minister to their community and their church,” Thompson said.

Tedeton discovered the play two years ago, but didn’t use it because she needed 20 youth to perform it. She said she had 13 kids, but eventually seven more joined the cast.

“This year, these kids have gone over and above,” she said. “I want to do plays that are meaningful to these kids.”

The young actors donned German and Dutch accents to portray their characters.

“It’s the most impactful play, but also the most challenging play we’ve done in years,” Assistant Director Rebecca Jones said. “It had a script with a dialect. Another challenge was having to live this message ourselves. We’ve learned so much from this family.”

Bible Baptist Church is located at 293 Stephens Street in Wilton. For more information about the drama team or the church, call 665-2939.