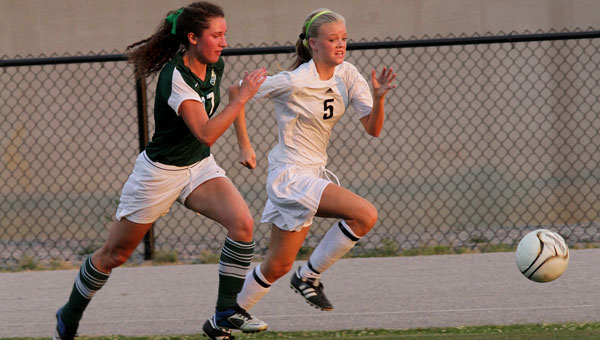 Thompson High School forward Amber Harless and a Mountain Brook defender chase down the ball in the Warriors' 2-0 loss to the Spartans in the second round of the Alabama High School Athletic Association Class 6A playoffs May 1. (Contributed/Eric Starling)

The Warriors, who ended their season May 1 with a 5-0 loss to Mountain Brook in the second round of the Class 6A playoffs, recorded several important victories during the season.

“We beat Spain Park, Vestavia Hills and Mountain Brook for the first time this season,” Button said. “It was really neat to for all of that to come about.”

Thompson rising senior forward Michaela Graber was selected to participate in the 16th annual All-Star Sports Week all-star soccer game July 10 in Montgomery. Button was chosen as a coach for the North squad.

Button said he’s thrilled to see one of the Thompson players recognized for the success of the program.

“I think it’s really nice to see all of the hard work the girls do recognized,” Button said.

FROM STAFF REPORTS Thirteen high school soccer players and two coaches from Shelby County have been selected to participate in... read more