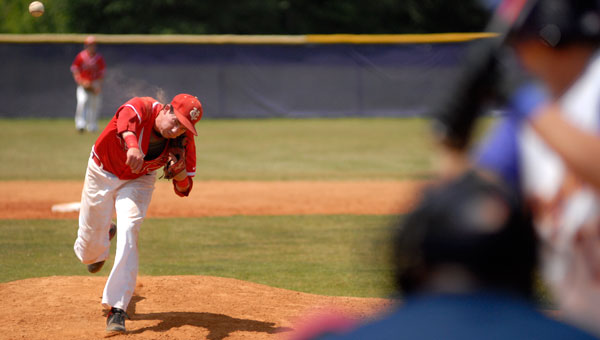 Coosa Valley Academy senior Hunter Winslett delivers a pitch to the plate in the Rebels' 9-6 win over Cornerstone Christian in the second game of a best-of-three series with the Chargers in the Alabama Independent Schools Association Class 1A semifinals May 2. (Reporter Photo/Wesley Hallman)

Hughes wasn’t surprised when Coosa Valley responded with a 9-6 win over the Chargers in the nightcap, which forced a deciding third game.

The third game will take place May 4 at 3:30 p.m. The series finale was originally scheduled for May 3 at 4 p.m., but the game was delayed due to inclement weather.

The two-time defending AISA Class 1A champions always keep it interesting, said Hughes, who expected the series between the two rivals to go down to the wire.

“Every time we play it’s a battle,” Hughes said. “It doesn’t matter if we’re playing the Yankees or Cornerstone Christian, it’s always a battle. It’s been that way all year.”

Cornerstone Christian coach Tim Smith agreed with Hughes about the expected length of the playoff series. The Chargers had an opportunity to close the door with a sweep, but they couldn’t hold on to a two-run lead in the late innings in the second game of the series.

Despite the comeback by the Rebels, Smith said he doesn’t expect his team to fold in game three of the series.

The Chargers redefined the baseball term “big inning” in the opening game of the series. Cornerstone Christian sent 18 batters to the plate and scored 13 runs in the bottom of the third inning, which erased Coosa Valley’s early 3-0 lead and helped the Chargers clinch the early momentum in the series.

Auston Wingard, who delivered the crushing blow in the inning with his three-run double, led the Chargers offensively as he finished 2-for-2 at the plate with a pair of doubles. Wingard drove in four runs in the win.

The Chargers faced three different pitchers in the inning and benefitted from six walks issued by the Coosa Valley hurlers.

Meanwhile, Davis earned a five-inning complete-game victory for the Chargers after giving up just three runs, including one earned run, on four hits with four strikeouts and one walk in the opening game of the series.

Allen Logan led the Rebels offensively as he finished 1-for-1 at the plate and drove in one run.

Stephen Cryer, Garrett McMillan and Cody Wood each added one hit and scored one run.

Jake Carter, who started on the mound, took the loss after giving up the first five runs in the bottom of the third inning.

Cornerstone Christian jumped out to an early lead in the second game of the doubleheader, with back-to-back solo homers by Lodge and Adrian Young off two different Coosa Valley pitchers giving the Chargers a two-run lead in the top of the third inning.

The Rebels took the lead for good with four runs in the bottom of the fifth inning. Carter drilled a two-run double to the left-center field gap to tie the game before a two-run single by Garrett McMillan gave Coosa Valley a 8-6 lead.

Cryer blasted a solo homer over the left-field wall in the bottom of the sixth inning to give Coosa Valley an insurance run.

Wood, who gave up a homer to Lodge in his first at-bat, settled in and picked up the win in relief after pitching four scoreless innings down the stretch.

Both Hughes and Smith are confident in their respective pitching staffs heading into the final game, which will determine who plays for the AISA Class 1A championship next week in Montgomery.

Wood, the Rebels’ ace, can still pitch three innings. Davis, the Chargers’ ace, still has two innings left in him.