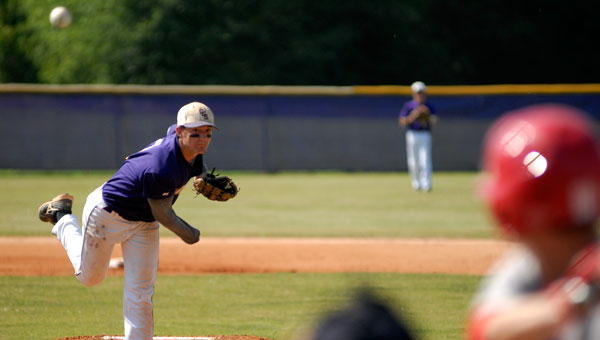 Cornerstone Christian School senior Austin Davis delivers a pitch to the plate in the Chargers' 8-2 win over rival Coosa Valley in the deciding third game of a best-of-three series in the Alabama Independent Schools Association Class 1A semifinals May 4. (Reporter Photo/Wesley Hallman)

COLUMBIANA — Cornerstone Christian School senior Austin Davis didn’t hesitate to give his coach an answer when he was asked if was prepared to start on the mound in the third game of the Chargers’ Alabama Independent Schools Association Class 1A semifinal series against rival Coosa Valley.

Davis fired his second complete-game shutout in a three-day stretch to lift his team to an 8-2 win over the Rebels, which clinched the Chargers’ spot in the AISA Class 1A championship series May 8-9 at Paterson Field in Montgomery.

“It’s what I’ve wanted all year,” Davis said. “I wouldn’t want it any other way.”

Smith said he told Davis to let him know if his arm began experiencing fatigue during the game. Davis never requested any help on the mound.

“We weren’t taking it from him,” Smith said. “He put his big boy pants on and played a great game.”

Davis gave up two runs on six hits while recording four strikeouts and just one walk int he complete game. Davis’ performance on the mound was only one highlight in the Chargers’ win over the Rebels.

Hagan Joiner made three spectacular catches in center field to take away scoring opportunities by the Rebels.

“Those were game changers,” Smith said.

Davis gave the Chargers a 1-0 lead in the bottom of the first inning with his solo homer.

The Rebels responded with a run in the top of the second inning to tie the game following an RBI single by Cody Wood.

Coosa Valley cut the deficit to 4-2 following a sacrifice fly RBI by Garrett McMillan, which drove in Tyler Hickman, in the top of the fourth inning.

Young pounded a three-run homer over the left-field wall to give the Chargers a 7-2 advantage before Auston Wingard drove in Davis on an RBI single to center field to cap the scoring for Cornerstone Christian in the bottom of the sixth inning.

Wood took the loss for the Rebels after giving up four runs on five hits in 2 2/3 innings.

Coosa Valley saw its hopes of a third-consecutive AISA Class 1A championship come to an end, but Rebels’ coach Bobby Hughes said the season-ending loss doesn’t take anything away from the accomplishments of his senior class.

The Coosa Valley seniors finished their careers with 108 victories and two state championships in the past three seasons.

“The kids battled all year,” Hughes said. “I’m proud of them.”